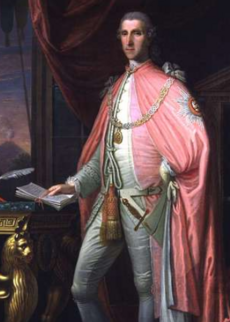 A diplomat is a noble position responsible for acts of diplomacy. In the current version, it is not possible to assign a dwarf to this position, and only rarely will one migrate to your fortress.

Diplomats from other civilizations tend to arrive on the map edge up to a week before or after their civilization's caravan, once your fortress has a baron. Each diplomat will attempt to attend a meeting with your leader: they will typically follow your leader around, waiting for an opportunity to discuss your situation. Your leader will need to perform the Conduct Meeting job, sometimes for quite a while, to satisfy the visiting diplomat; by default they will want to do this in an office, though they will use a bedroom (somewhat grudgingly, with an accompanying negative thought) if no office is available.

In the event that your leader is replaced, killed, traveling off-site, or taken by a strange mood, the diplomat may decide to leave your fortress "unhappy".Bug:576 Curiously, this will not occur if your leader is otherwise unable to perform the "conduct meeting" task. You can currently lock a diplomat in a room and he will wait years to attend the meeting your noble is constantly conducting (and all subsequent diplomats appear to wait in line for the first to finish); this behavior is presumably a bug.Bug:8947

An unhappy diplomat will naturally prevent you from creating agreements and ending hostilities, however it is not currently known what other effects this has on relations with that civilization. Whether the diplomat successfully met with your leader or just gave up, a diplomat who has decided to leave but is prevented from reaching the map edge will eventually go insane.

If a diplomat is killed (or permanently detained), a new diplomat will arrive the following year. The death of a diplomat will, however, strain relations with the represented civilization, and might result in a siege.

Dwarven diplomats are typically only encountered in Fortress mode - they do not visit your fortress, nor can you appoint one yourself. Instead, your own dwarven civilization sends an outpost liaison to negotiate trade agreements with your fortress (assuming your fortress is not the mountainhome).

Other dwarven civilizations on the other hand may send diplomats once you have contacted them with your own diplomats. They behave similarly to human diplomats.

However, dwarven diplomats may occasionally immigrate to your fortress, e.g. as consort to an arriving monarch. Immigrant diplomats currently do not conduct meetings or otherwise perform diplomacy, though they do have room requirements equivalent to an outpost liaison and may issue demands.

Greetings from the woodlands. We have much to discuss.

Once your baron has been appointed, the neighboring elven civilization will attempt to make first contact - at the very beginning of the year, their diplomat will appear unannounced at the edge of your map and immediately attempt to meet with your new leader. If you have cut down any trees, you will be scolded and given a stern warning - You have disrespected the trees in this area, but this is what we have come to expect from your stunted kind. Further abuse cannot be tolerated. Let this be a warning to you. - otherwise you will be congratulated for your kindness to the environment.

During subsequent visits (which will happen within a few weeks of the arrival of their caravan), elven diplomats will ask you to limit your tree-cutting to a varying amount of trees depending on the surroundings of your fortress. If you agree to this concession, the civilization c screen will track the number of Fell Tree jobs you complete during the year, shown as (remaining allowed cuts)/(total allowed cuts). Both above-ground and subterranean trees are counted. They will then share with you news of world like an outpost liaison would. The agreement (and the count) remain in effect until the next year's agreement is negotiated. If you stay within this limit, the bond between your civilizations will be strengthened; violating it will strain diplomatic relations and potentially lead to attacks.

The negotiated number of felled-trees in the quota may be altered by other factors, including your noble's office quality, happiness, and social skills. Maximizing each of these can allow your noble to talk the elves into letting you cut down a few extra trees each year.

If you have managed to start a war with the elves, whether due to a mishap involving their caravans or from violating a tree-cutting quota, the diplomat may offer a peace treaty.

It is a well-known fact among the dwarf nobility that many seemingly-rude interruptions and delays such as sleep, drinking, deconstructing of walls, etc., that occur on a regular basis during the conduction of diplomatic meetings with elves actually serve one simple purpose: to stretch the period of time when the old tree-cutting agreement is no longer in force, but the new agreement is not yet signed. During that time, all the fortress woodcutters must clear-cut as many trees as possible.

Greetings, noble dwarf. There is much to discuss.

Diplomats from human civilizations tend to just say It's such a pleasant place you've carved out for yourselves... They will then share with you news of the world like an outpost liaison would, as well as draw up a trade agreement for the next caravan v0.47.01. If you are at war with them, the diplomat may offer a peace treaty.

Note that all traps "seen" by the Human diplomat may be ineffective against subsequent human attackers.

Sometimes, under certain circumstances, a human diplomat may be a necromancer. When such an event occurs, you will not be notified of the diplomat's arrival, nor will you be able to see them. They will act as a normal, non-diplomat necromancer: sneaking around your fort undiscovered, raising the dead and causing havoc. When they are discovered, you will get the alert message "Invaders! Drive them away!", the game will pause and the camera will zoom to them. At this point they become hostile to your civilization, scaring dwarves and setting off traps. Your militia may also try and kill them. It is unknown whether keeping them caged/pitted harms your relationship with a civilization, but killing them certainly does.

A human diplomat may also be a vampire who enjoys recreationally visiting your fortress and hanging around having fun... while draining your citizens of blood. Most normal methods of vampire detection are frustrated by lack of introspection into the diplomat's characteristics. A diplomat can be accurately convicted of the murder of one of your citizens and receive no sentence, possibly enjoying diplomatic immunity (or some element of the justice system may be confused by the situation; or, since the observed case was a law-giver visiting a Mountainhome, the principle involved may have been head of state privilege rather than ordinary diplomatic immunity).