Insanity describes any of the conditions that cause a dwarf or other creature to immediately stop what they were doing and go mad. Dwarves that are insane are unable to sleep, eat, drink, follow orders or perform any job. Insanity is permanent, and comes in four flavors: "Melancholy," "Stark Raving Mad," "Berserk", and "Catatonic". Each of these will inevitably end with the death of the afflicted dwarf. Tantruming, obliviousness or depression may be a sign that the unfortunate dwarf may go insane unless something makes the dwarf happy.

Traveling merchants and their pack animals can also go insane. If this happens, the accompanying guard/s will kill the merchant and/or his animals. If this rare case does happen, the merchant's goods will be free for you to take.

Children (even babies) may become insane. This, in a smaller fortress without a military, will usually lead to much Fun. 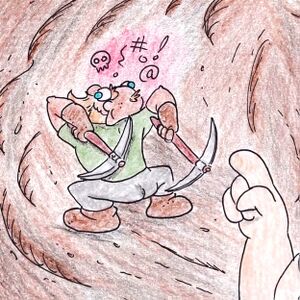 Don't let it go to your head

The following events/conditions can drive a creature insane:

There are four known types of insanity, but a dwarf may only be afflicted by one at a time (one is enough). The personality of the dwarf influences the type of insanity.

The afflicted will strip naked and drop each of their items one by one. They will then wander your halls aimlessly (or sometimes stick to their room or burrow), babbling incoherently until they eventually die of dehydration or starvation. They do not actively seek out their own deaths, but death does a pretty good job at finding them anyway, as they ignore any and all hazards they encounter while milling about.

Dwarves with high [ANXIETY_PROPENSITY] are more likely to go stark raving mad, typically after stumbling around obliviously one too many times.

"I've been feeling anxious."
"I can't take much more of this!"
"Everything is all piling up at once!"

Melancholy
<dwarf> is stricken by melancholy!

The afflicted is overcome by depression and will seek out ways to end their life, considerably slowing their movement in the process. If they cannot find a cliff to jump off of, or water/magma to drown/burn up in, they will simply starve or dehydrate themselves to death. Be warned that a melancholy mother may take her baby's life along with her own, if she still carries it.

Dwarves with high [DEPRESSION_PROPENSITY] are more likely to be stricken by melancholy, typically after slipping into depression one too many times.

"It's all starting to get me down."
"I feel so tired of everything."
"I cannot stand the world any longer..."

In a berserk rage!

The afflicted attacks friend and foe alike in a blind rage. This can be dangerous if it happens to an experienced dwarf (especially one carrying an artifact weapon). Luckily, war dogs can quickly bring down an unskilled dwarf.

Berserk dwarves are even known to kill their own newborn baby right after the baby is born.
The dwarf in question becomes an enemy to your civilization, meaning it will set off traps and engage your military.
Dwarves with high [ANGER_PROPENSITY] are more likely to go berserk, typically after throwing one too many tantrums. They can also be identified by what they say:

Catatonic
<dwarf> has stopped responding to the world...

Staring off into space...

The afflicted does nothing but stare blankly into space until they inevitably starve to death.

Catatonia is special in that it will override other types of insanity - dwarves with extremely high stress vulnerability ("becomes completely helpless in stressful situations") have a 50% chance to become catatonic, and dwarves who have below-average (less than 40) propensities for anger, anxiety, and depression have a 100% chance to become catatonic.

"I've been under some pressure."
"Im feeling really worn down."
"I just don't care anymore..."

As stated, there is no cure for a dwarf who has fallen into one of the aforementioned forms of madness. Preventative measures may be considered, since a dwarf may show certain signs of psychological illness before it has fully taken hold. Luckily, recent advancements in health care have led to an exciting new field of medicine specifically meant to improve the overall mental welfare of the sanity-impaired. As with all experimental treatments, efficacy and safety are not guaranteed, but early applications of the listed techniques have yielded promising results.

Initial research indicates that psychotic dwarves may benefit from extended periods of isolation, during which they may turn inward and away from their ecstasy. Therefore, if the patient has entered their room, locking them inside might be the best thing to do. If the patient is catatonic, or remaining stationary for a long period, then erecting a wall around them is recommended. Remember to open the door or bring the wall down before the patient succumbs to thirst or starvation. Alternatively, food and drink (and other items) may be dropped into the room through a delivery system of some sort, but remember that isolation must remain total if full effectiveness is to be achieved.

Be wary of dwarves who have recently commandeered workshops; it is a serious sign if the patient is screaming for products that cannot be provided (especially if stockpile records are up-to-date and publicly available). In cases such as these, the best treatment is to ensure they cannot escape the workshop in the event they turn violent. That way, they may be safely relocated to a segregated area where they can work off their aggression harmlessly on the fortress walls. Be certain to keep them away from animals, prisoners, and other patients! Once the patient has calmed down, they can be brought out and returned to their lives.

Breakout cases such as above can sometimes be prevented by giving the patient some new pets to take care of. For reasons uncertain, war dogs appear to have the greatest effect (although this may be a matter of availability; researchers have achieved results with bears, tigers, and even cows). If the patient should break at some point, the presence of these animals may be enough to tranquilize the patient.

It's somewhat common for soldiers to show signs of imminent madness, due to the hardships of life as a warrior. A widely-endorsed suggestion is to surround the patient with their comrades-in-arms, who might provide cheer and a reminder of both duty and the support of friends. And, should the patient turn violent, they will most likely be subdued with minimal injury (to civilians).

Everyone knows that water helps with aches in joints, what most people don't realize is that in terms of dwarven anatomy, the brain is a joint, thus having a dwarf swim until they recover may help, even more so if their brain is exposed so that the soothing water can affect the joint better. Salt water is preferred, tests show.

In many cases, madness has its roots in a deep feeling of powerlessness experienced by the patient during his schizophrenic delirium, with cases of patients hearing voices of Carps, Elephants and strange stories about boats being murdered. Recent studies show that by safely giving the unfortunate patient the occasion to act on his own initiative and make him feel the consequences of his actions, dementia can be avoided.

Sometimes, the patients simply need time to think about their life. A good way of giving them all a long while to think (experts agree) that putting patients into cryo-stasis or encasing them in carbonite is the best way to combat rage, social rejection and other mental issues.

Studies have shown that some dragons, in their infinite, ageless wisdom, have found solutions to common insanity and are even willing to impart said cures to dwarves stricken with any sort of madness. This method is often most useful when a dwarf who is having trouble making friends seeks to console himself with a resident dragon within the dwarf's own fortress. He just wanted a ring.

In many (4) cases of mass hysteria a room with a mist or steam generator may calm many of them down, allowing them to calm down other people. It is still unknown as to why this sometimes works, but it is theorized that the mist/steam "cools them off" literally and figuratively. Warmer mist treatments can be used in particularly extreme cases.

It has come to the attention of some physicians that many psychological ailments may be caused by a large amount of toxins in the body. They have found with some success that a patient locked in a room and using advanced methods of massage therapy have gained some improvement. It is speculated that this pressure, caused by a professional deep tissue massage therapist, will immediately release all toxins from the patient's body. For best results the massage therapist should be one floor above the patient.

Ever wondered how you add a decoration for rooms, without stone, wood or metal? Having a dwarf standing still? Get a fleshworker, it will make them into a ☼Dwarf Flesh Statue☼ and then push them into a room, without using a workshop.

Carefully selected aromas will soothe the minds of even the most disturbed dwarves.

Sometimes the best method to resolve hard feelings is talking your differences out with a qualified therapist. For best results, dose the patient with tranquiliser

Any new developments or experimental procedures should be reported to the mountainhomes immediately for verification and cataloguing. If even a single dwarf is spared the indignity of madness in this way, it will be worth it.

Recent research suggests that mad necromancers are cured from their madness if killed and reanimated as a necromancer. [1] Note that the necromancer who raises the other must be very powerful.

Dwarves must put a significant amount of research into the phases of the moon and their ability to cause or cure madness. Tentatively there is a Lunar Amontillado Combinitory treatment which shows great promise. This treatment also appears to require no additional use of foodstuffs