A large mammalian herbivore. They often bear large horns and the males are ill-tempered. They are domesticated for milk and meat.

Cows are domestic animals that can be brought on embark. Males are predictably called bulls, while females are cows and infants are calves. Much like other domestic herbivores, they require a pasture to survive, otherwise they will starve. If attacked by a hostile creature, cows will normally flee rather than fight and may be killed, so it's best to keep them someplace safe.

Cows are among the largest of all domestic livestock (losing only to yaks and water buffalos), making them prime targets for a meat industry. They are also a good source of fat, bones and horns. As one would expect, cows can be milked, and their milk can be later turned into cheese. They are also fairly valuable pets for dwarves who decide to adopt them. 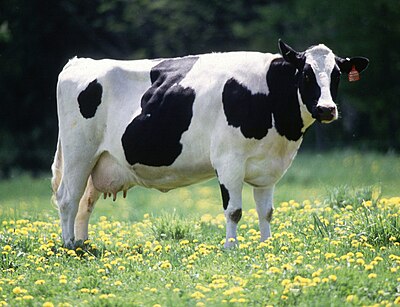