A large omnivorous predator found in temperate woodlands. Mainly living on berries, it will also steal carcasses from other hunters. Though normally a docile animal, it has been known to kill in a predatory attack.

Black bears are dangerous and rare creatures that raid your food and drink stockpiles who may be found in temperate forests and taigas. They are mainly a threat early in a fort's existence before defenses have been established.

In any given region, up to three black bears may appear before they become extinct. They are always solitary, and hibernate during the winter. This makes winter a decent time to set up a bear trap: surround a small food stockpile with cage traps, and black bears will be yours, assuming it doesn't get overwhelmed by other natural thieves (like raccoons or grizzly bears) first.

Black bears can be trained and have a reasonably high pet value of 300. This makes them a fairly decent option for a highly rewarding breeding program: black bear parts are worth twice as much as those of more domestic animals. However, unlike grizzly bears, black bears cannot be trained for hunting or war without modding. 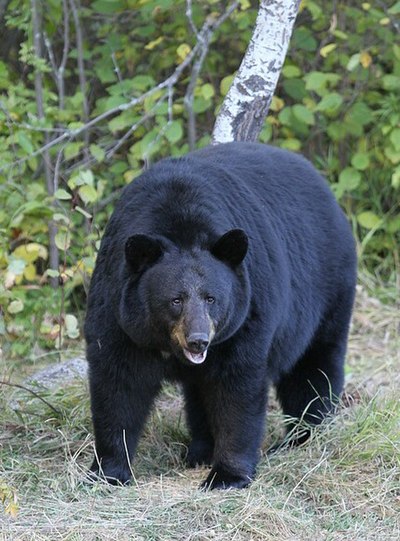 Admired for its strength.
Retrieved from "https://dwarffortresswiki.org/index.php?title=Black_bear&oldid=286727"
Categories:
Hidden category: