A huge, striped predator. It is found in almost any climate on a lone hunt for its prey.

Tigers are strong carnivorous animals that roam tropical areas. They are one of the largest "normal" carnivores. Tigers may also appear as mounts during a siege.

Captured wild tigers may be trained and kept as pets, turned into hunting or war beasts, or bred as livestock for a meat industry. While they do not produce as much meat as some common livestock, tiger butchering returns are worth three times as much as those of common domestic animals. Due to their limited population size, capturing a breeding pair may prove difficult. Sometimes elven caravans have fully tame tigers to trade.

Tigers make decent war animals, and they breed relatively rapidly. As non-grazers, tigers don't require a pasture, and so need no special attention after taming.

Some dwarves like tigers for their stripes, of course. 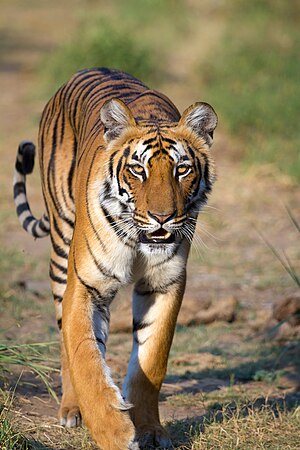 Admired for its stripes, of course.
Retrieved from "https://dwarffortresswiki.org/index.php?title=Tiger&oldid=287206"
Categories:
Hidden category: