Cheese is a food item made from milk at the farmer's workshop with the cheese making labor. It can be eaten as is or cooked into prepared meals.

A single "Make cheese" job will take a barrel of milk to the workshop and produce several stacks of cheese of size 5 or less - for example, a barrel containing 17 units of milk will produce 3 stacks of 5 cheese and 1 stack of 2 cheese.

A container of frozen milk will, obviously, not be made into cheese.

The milk of any milk-producing animal can be converted to cheese. With the exception of dwarven cheese, which is made from dwarven milk, all cheeses are priced at the value of 10☼.

Counter-intuitively, while milk in a barrel won't rot, cheese outside of a food stockpile will.

1: By default, you can't get dwarven milk or cheese from embarkation or dwarven caravans Bug:1449. See this section for a workaround. 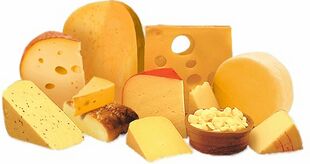 You are likely acquainted with the dwarven fondness for cheese, but did you know that a dwarf actually invented cheese? She was trying to ferment milk and turn it into a new kind of alcohol, and was quite surprised when she ended up with something else entirely. That's why the dwarven word for cheese is 'shokmug.' She was shocked that it couldn't be drunk from a mug. Meanwhile, the goblin word for cheese is 'ursus', which is a whole new can of worms.