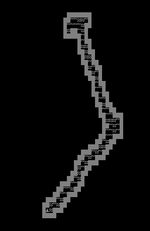 (not to be confused with fortress mode burrows.)

A burrow is a default type of lair. Most beasts will settle in them, including predatory animals, werebeasts, rare wild vampires, certain megabeasts, and some night trolls. A burrow typically consists of two small underground chambers connected through narrow tunnels. Lairs of megabeasts contain all the items stolen by them. Burrows of night trolls have the entrance covered by a hatch cover and contain some furniture and vermin remains.

The entrance of a burrow may be difficult to spot in adventurer mode; the directions in the upper left corner of the screen will navigate you to it. 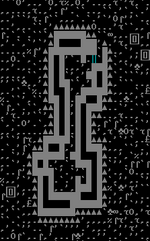 A mound is home to a night troll, or a whole family of them. The inside of a mound consists of a few rooms which may contain furniture, cutlery, food, cages, and vermin remains.

A roc's nest at a wilderness location with a lot of stolen stuff.

A wilderness location is a place inhabited by a roc. Its appearance doesn't differ from the surrounding terrain, except that it may contain items stolen by the beast. Beasts which inhabit wilderness locations often settle in caves instead. Roc lairs have a nest box for them to use and it often contains roc eggs.