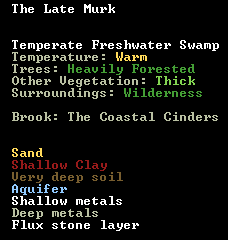 A region or subregion is a named world area, a continuous set of tiles on the world map with the same or similar biomes, and the same alignment. The entire region will be either evil, neutral, or good.

In advanced world generation, regions are classified by size: 24 or fewer tiles is a small subregion, one with 25 to 99 is a medium subregion, and one with 100 or more is a large subregion.

Regions must be the same or similar types of biomes with any degree of surroundings savagery. Some different biomes can occur in the same region as follows:

Even if drainage and rainfall are the same in two tiles, if the temperature is different enough that one tile is a tundra or glacier, and an adjacent tile is not, they will be in different subregions.

Additionally, during world generation, lakes will sometimes be generated in the place of tiles that would usually have an elevation higher than 100, in which case they again do not form subregions with adjacent land tiles.