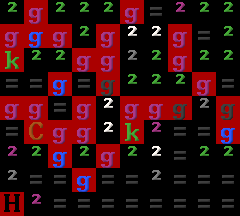 Dwarves that come across the corpse of a sapient creature tend to be horrified unless the dwarf has a high level of discipline, cancelling their job and giving the dwarf bad thoughts, so it's generally best to keep corpse stockpiles out of obvious view. Horrified merchants will also scuttle their wagons, drop their merchandise, and flee Bug:7185, which may be undesirable, as there can be diplomatic penalties associated with a merchant losing goods.

Being horrified will also give a small amount of experience towards the discipline skill, so it's possible to exploit corpse stockpiles to increase the discipline of your dwarves, though this is generally ill-advised due to the high likelihood of fun.