A large hooved, maned herbivore. They can run swiftly and many are domesticated as steeds.

Horses are common domestic pack animals who can often be seen in caravans pulling wagons and carrying goods. In addition to producing a large amount of meat, fat and bones when butchered, horses can also be milked and serve as a viable base for a cheese industry. Dwarves cannot ride horses, but humans and elves can. Horses require a sizable pasture to survive.

Horses can be bought before embarking, but are quite expensive. Horses are sometimes brought along by immigrants, as pets or strays. Horses also occur very often as wild animals in herds. They are non-aggressive and will avoid dwarves, but an inexperienced hunter who engages them in melee will soon find out that they are much bigger than dwarves, and over twice as fast. As they appear quite frequently and in numbers, they are ideal targets for hunting and military practice, being also a good source of butchering products. 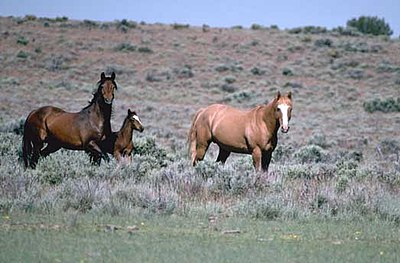 Horses are everywhere. That "dwarven" fortress over the distance? It's one dwarf and about 500 horses. The whole world is horses. I'm horses. Hell, you're probably horses too. Neigh.