The fishing industry is one of five food-producing industries (along with farming, the meat industry, the poultry industry, and the beekeeping industry). In addition to sustaining your hungry dwarves, the fishing industry produces non-edible raw materials that can be used by your workshops, like shells and extracts. Fishing is an excellent way to initially feed your dwarves, requiring very little setup or maintenance, available as long as you have access to some form of fish-bearing water (piscine spawning grounds?) and, say, a cheesemaker or two looking for something to do between breaks.

Fishing is the primary activity associated with the fishing industry, as it is the main way to acquire fish. Fishing is unique in that unlike hunting or trapping, dwarves need no special equipment to catch fish; they just pull the hapless critters right out of the water with their bare hands. The fish that they catch are usually vermin fish (or really aquatic animals in general, not just fish), which makes keeping track of stocks much more difficult. Each fish caught will each yield one meal, once prepared. Note that the presence of vermin fish on-screen does not signify there are fish there for fishing.

If you simply tell your fisherdwarves to go fish, they will do so in the nearest source of water. Most water sources more than a few tiles in size have some stock of fish, but that doesn't necessarily mean that you want your dwarves fishing there. While stocks of fish in bodies of water that do not flow are now renewable, unlike in the pastBug:2780, a fisherdwarf can still have lots of fun at their secret fishing hole next to the goblins' favorite arrival area. Zoning is highly recommended, but keep in mind an agile Urist McFisherdwarf assigned to an out-of-the-way fishing spot, with a nearby lockable escape tunnel, can make an excellent sentry.

Fishing zones are preferred areas to fish, and changing standing orders to zone-only fishing with o-z, and then setting fishing to zone-only will force all fishing to be done in the zone. To set up fishing zones, designate a zone(i) as usual, on shore tiles adjacent to water. You can only set the zone to be used for fishing if there is some fish-bearing water inside, or if it is not yet known if there are any fish there. If there are no fish in a particular region, you will get the announcement "There is nothing to catch in <some area>", and designating a zone next to water in that region will show "0" for fishing.

Fishing zones are also an effective way to temporarily disable all fishing without changing labor preferences, particularly if your fisheries already have trouble keeping up. Activate zone-only fishing as described above, and create a fishing zone. Then you can toggle the zone's active flag to control fishing. However, dwarves that had already made up their mind about it will still carry out a single fishing task.

The only way to catch "river fish" is to fish from the exact tiles the river originally occupied; similarly, any other biome-specific fish can only be caught from tiles originally belonging to that biome. Any other body of water will be treated as a murky pool, so you'll just get stuff like pond turtles.

Freshly caught raw fish cannot be eaten; they must first be cleaned at a fishery. The presence of raw fish automatically triggers "Prepare a raw fish" to be queued up at the nearest fishery. So long as you have enough fish cleaners and fisheries to keep up with your fisherdwarves, fish cleaning should be an automated process. Raw fish is a classification in the stocks menu for fish that have yet to be cleaned, useful for seeing how backlogged the fishing industry is, or isn't.

Once a dwarf catches a fish, he will carry it off to the nearest stockpile and return to fishing; even if the dwarf has fish cleaning enabled, he will almost never perform the task on his catch, as fishing is regarded as higher-priority, even if fish in your stockpile are in danger of rotting. A rule of thumb is to have twice as many fish cleaners as fishers, as fishers generally catch fish faster than cleaners can process them. To this effect, mature fortresses often have dedicated cooks/brewers/fish cleaners tasked to their food preparation areas. It is especially important to have barrels and/or large pots in stock if you have a fishing industry, as openly stored fish rot very quickly.

Once a fish is cleaned, it is known as a "prepared" fish, and can be immediately eaten. Fish, both raw and prepared, can also be cooked into food at a kitchen.

Raw fish are known as unprepared fish in the stockpile settings interface.

Animals with shells (like pond turtles) will also leave them behind, useful for the purposes of bone carving and appeasing moody dwarves. Since cooking unprepared shelled creatures loses the shell, you probably want to disable this behavior for animals that have them (turtles, mussels, and oysters) until after the fish cleaner is done with them. In addition to being used to create low value crafts and some passingly useful/sellable shell armor, every item type can be decorated with shells. Given that any halfway decent fishing industry in a location with mussels or oysters will keep a craftdwarf or five swimming in shells, this can be VERY lucrative. Setting up a few craftsdwarf workshops next to a dedicated shell stockpile near your fishery with constant repeating orders of "decorate with shell" and assigning bone carving to all dwarves with spare time lets them quickly train bone carving to legendary levels, while delighting your dwarves as every statue, door, and sock they encounter is bedazzled with shell images of shell items decorated with shells and guaranteeing that merchants will pay top dollar for your masterful craftsdwarfship.

Pearls are an as-of-yet unimplemented mussel and oyster product. Although you can tell your dwarves to decorate with pearl at a craftsdwarf's workshop, nothing will actually happen, as there are no pearls in the game; this is actually one of the longest-running and most obvious missing features, having persisted since 23a.

You can buy processed fish at embark and from traders, in which case the key word is processed; they will always already be prepared, and will never require preparation or have a shell. Buying fish from caravans is often a good idea if you do not have a strong fishing industry, as it adds to the dwarven diet variety, which is always a good thing.

Fisheries can also queue up a "capture a live fish" task; to fulfill this task a fisherdwarf will grab an animal trap and set it in the river, retrieving it when it catches something. Note that if no animal trap is available, the task will occupy the fishery forever, preventing its other functions from taking place. Captured live fish can serve as an attraction in an aquarium, or be made into extracts with the "dissect a live fish" task at the fishery, using the fish dissection skill. In particular, dissected moghoppers yield five units of mog juice, each worth 50☼, making it quite lucrative for something that would otherwise have served little more than a single meal.

Larger, non-vermin fish cannot be caught with bare hands for obvious reasons. Large fish like carp and sharks are individual creatures, appearing as such on the unit list, and must be butchered, producing dozens or, in the case of whales, hundreds of meat products. Note that fish hunting is mostly an oceanic activity - rivers will only ever have occasional carp runs and the like.

Advanced fortresses located near the ocean, a lake, or large and well-occupied sections of river may make use of a fishing-adapted drowning chamber: a large room lined with all sorts of traps into which water is allowed to filter through via water pump pressure. No creature knows of the evils of the chambers as do the merpeople, whose numbers were, in the past, constantly reduced by dwarves seeking their extremely valuable innards.

Large fish can be caught in or killed by traps located along the river bottom. The issue is setting the traps and retrieving their bodies for butchering, both tasks that require a dry riverbed; this means that you must dam or redirect river flow, build the traps, funnel it back through, and then have a way to quickly get rid of the water (probably with screw pumps) so your dwarves can drag them back to the butcher's shop. Such river control, as well as the construction of genocidal chambers, is a fairly complex engineering project.

For the most part, the fishing industry is self-sustaining. Have some fishers, have some fisheries, and have some fish cleaners, and everything should run smoothly. However, a big part of fishing inefficiency is hauling the fish from the river to the table; solving this requires bringing the river closer to home, necessary for wells as well and potentially doubling or even tripling your production as dwarves can toss fish right into the nearest food stockpile.

The largest challenge in the fishing industry is ensuring the safety of your fisherdwarves. When working outdoors, they are susceptible to ambushers. The process of building an artificial river is out of the scope of this article, but creating an internal fishery is easy once you have the pressure worked out: simply channel down to your river, just like with a well, and build some floor grates, as dwarves have no trouble fishing through them. Doing so removes the danger of being far from home in case of a potential siege or ambush and keeps your fisherdwarves happily inside at all times. 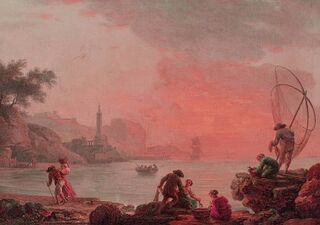 Not the greatest smelling location.