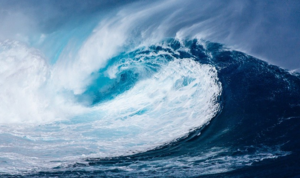 An ocean is an immense volume of salt water. Oceans are often bordered by sandy beaches, where driftwood can be found. Marshes and swamps also tend to form around oceanic coastlines, especially near rivers. The land surrounding oceans also tends to have a high water table, resulting in aquifers close to the surface.

Oceans are an excellent source of food for a new fortress, usually having tons of fish, and contain shell-bearing creatures like oysters and mussels. However, sometimes when you embark on a coast, you might receive announcements like "There is nothing to catch in <some area>". If this happens, you won't be able to fish in the ocean in this embark; you may wish to abandon the fort and start again elsewhere.

There are three varieties of oceans, based on temperature, which affects the sea life found there: Arctic, Temperate and Tropical. Oceans in a freezing climate (usually arctic oceans) will freeze, just like rivers and pools, acting like a glacier.

While by default it's impossible to embark in an ocean biome exclusively, DFHack offers an option to bypass this restriction. However, in order to found a fort, one must also embark on a site that is at least partly Arctic ocean, to provide ice for an initial foothold.

Waves will periodically wash over the coast - the tiles will not get wet. However, if a wave washes over a staircase, the floors below it will be slowly flooded. Cave moss will not grow in the mud left by salt water. The waves move over all natural tiles, and seem to move independently of constructed tiles like walls and floors. Be mindful not to carve away natural walls and allow tide to enter your fort, and cause excess slowdown. Sea walls can be built to block waves and protect beach areas, but need to be completely closed off to be effective. Waves also have a tendency to move items left on the beach, so it is inadvisable to place stockpiles too close to the shore—also beware that this effect means that dwarves can be knocked unconscious if hit by driftwood washed in from waves.

Since ocean waves do not actually move the water in the tiles below them, they do not create flow. Thus, waves cannot power a water wheel, making tidal energy generation much more difficult.

In adventure mode, being pushed by ocean waves occasionally increases swimming skill without the risk of drowning.

The ocean floor will be made up of entire layers of, or combinations of, the following:

Most of these layers also support aquifers, which are saltwater like the surrounding ocean, making the extraction of these materials rather difficult in fortress mode. Limestone is a notable exception, making it ideal for excavation from below since it is also a flux material.

Almost all tiles next to oceans have aquifers, which require fairly complicated schemes to sidestep. In addition, oceans are salt water resources, requiring desalination with a screw pump into a cistern to use for drinking. On the other hand you have an inexhaustible source of water for fishing, drowning chambers, and so forth, as well as a spawning point for some very big and very meat-profitable creatures: sperm whales, orcas, and the like.

In arctic oceans with a by-definition freezing climate, none of the aquatic vermin or creatures will be present when the water freezes over. This leaves only terrestrial and amphibious animals to appear because they are able to live on land.

Starting on an arctic ocean[edit]

While by default it's impossible to embark in an ocean biome exclusively, DFHack offers an option to bypass this restriction. However, out of the three ocean biomes, only the arctic ocean can be feasibly embarked on, having a frozen surface year-round; although it is possible to choose a site that contains other oceanic biomes as well and expand over water or undeground. As it offers few resources, having only a thick layer of ice with deep water underneath it, surviving in this biome may prove to be very difficult, and should be reserved for a challenge only.

You have to disable cave-ins in d_init.txt and keep them this way all the time. As the map edges do not provide support for the ice sheet, it would otherwise collapse into the water below, killing everyone in the resulting mayhem.

Alternatively, send in a sacrificial group for the first embark and allow the surface ice to cave in and kill everyone, then reclaim the site. This has the added quirk of creating solid ice all the way down to the ocean floor, which lowers the difficulty immensely.

The frozen surface of the ocean offers nothing but ice and salt water, therefore requiring you to bring all the necessary supplies with yourself. Here is a comprehensive list of what you will need:

Besides the livestock and trading, wild animals such as penguins and seals will occasionally enter the map and may be hunted down for meat. This is most easily done using the melee method, once you've forged the basic weaponry. You may also channel a hole in ice to fish in it, although the ocean will often lack fish.

If you are using a sacrificial embark, you could stock it with a lot of food to give your real embark's animals time to multiply. You could then dig down to the rock layer at the bottom of the ocean and build a farm.

This is arguably the most difficult part, as the salt water is unsuitable for drinking and will freeze if you try to pump it out to desalinate it. In general, the only available drink is booze, and the only source of it is the dwarven caravan, as no other civilizations will travel through the ocean. Manage your supplies carefully.

You could also build a well. If you dig deep enough, retiring and unretiring will cause your tunnels to fill with water. Furthermore, you do not need to choose a site that is wholly an arctic ocean biome. Pick a location with warmer waters as well as permanent ice, and you can have water for at least part of the year.