A medium-sized fish found in lakes and streams. They are bottom-feeders and tend to gather in groups.

Carp are a species of fish found in tropical freshwater rivers and lakes, where they appear in groups of 5-10 individuals. Infamous in previous versions of the game for their aggression and disproportionately powerful bite attacks, carp in the current version are an inconvenience at worst. Newborn carp are known as carp fry.

Carp are nearly as heavy as dwarves but are entirely benign, and due to being aquatic, they will never attack civilians out of their own volition. While old carp were vicious, today they are overcome with terror at the sight of fisherdwarves and serve only as target practice for your hunters. Undead carp, however, are a different story altogether. Carp possess a pet value of 50, but lack the necessary tokens to be trainable (on top of being out of reach).

Admired for their protruding mouths.

In prior versions of the game, carp had teeth that could inflict 3 times as much damage as an unarmed dwarf's fist, and so could dispatch an unarmed and unarmored dwarf (e.g. a fisherman, or a miner going for a drink) with ease. They were also strangely aggressive for fish, something which was kept for many releases because it was funny.

"I think I made fish too hardcore" --Toady One 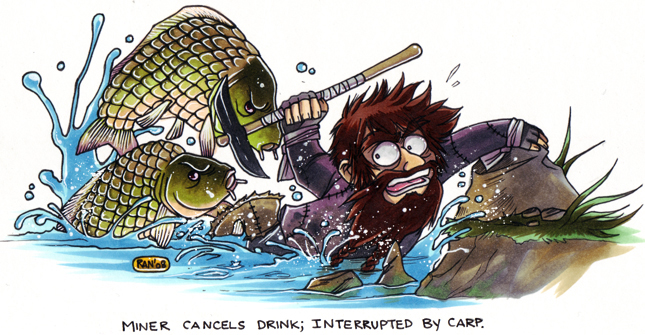