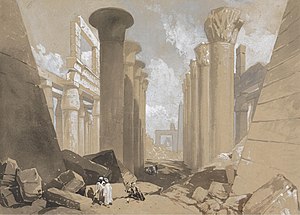 Ruins are sites which will appear on the map when a player-made fortress is abandoned to ruin rather than retired, or when sites belonging to any civilized race are abandoned or destroyed due to invading armies or megabeasts. These abandoned fortresses and other sites will appear as μ on the world and fast travel maps in both fortress and adventurer mode. Any sites that once belonged to the player race (or the player him/herself) (normally dwarves) may be reclaimed using reclaim fortress mode.

Barring abandonment, ruins typically appear when a civilization which is at war with another civilization doesn't [LIKES_SITE:x] the type of site that they have just taken over, leaving only a tiny few straggler-forced converts that can be slain by beasts. Megabeasts such as forgotten beasts and titans also appear to frequently kill and/or drive out the residents of, and take up residence in, dwarven fortresses. This has the potential of making those reclaims exceptionally fun depending on the monster. Abandoned settlements and such may or may not be reclaimed by their parent civilization during either world generation or gameplay.

See the map legend for more information on map symbols.

A human town destroyed by an elven civilization in war, recorded in the legends
Retrieved from "https://dwarffortresswiki.org/index.php?title=DF2014:Ruin&oldid=261249"
Category:
Hidden categories: