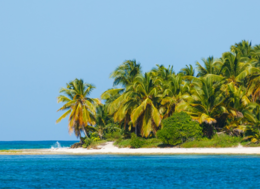 Islands are geographical features distinguished by isolation from main continents. Island fortresses are characterized by inaccessibility to most caravans and invaders. Only civilizations located on the island, and your parent dwarf civilizations, will be able to make it to an island fortress. The only exception to this is if the island is in close enough proximity to land, and in a Cold or Freezing biome, so that the ocean is able to freeze and caravans are able to cross.

Reaching islands can be a difficult challenge. One way would be to swim it, and brave the hazards of the ocean and climate. Another way would be to cross it through the caverns but that may present another set of obstructions and dangers. You may also try to establish your own camps to build a bridge across the ocean tile, making the return trip much easier. The easiest way to reach an island however is with a giant variant of any flying animal as your pet which can then be ridden across any body of water.