A medium-sized semi-aquatic rodent. It lives in large herds and barks when alarmed.

The Capybara and its derivatives are among the very few animals in the game which you can hear at a distance in Adventure mode. The only other species known to issue sounds is the kakapo. Capybara sounds will be described as whistling or barking. The possible announcements are as follows:

If tamed in Fortress Mode, capybaras require a pasture. They are amphibious, being able to swim even from birth. They make moderate-value pets, and produce respectable butchering returns, though other non-grazing species require less space and management.

Some dwarves admire capybaras for their enormous rodentness, their graceful swimming, or their resonant barking.

In real life, the capybara can be found in South America and is the largest extant rodent in the world; they are close relatives of guinea pigs.

According to Wikipedia, a normal capybara litter is 4 pups. In Dwarf Fortress, however, they only give birth to 1-3 at a time. 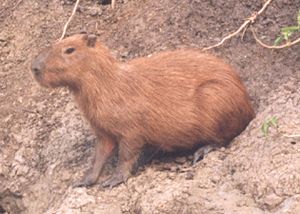 Admired for its enormous rodentness