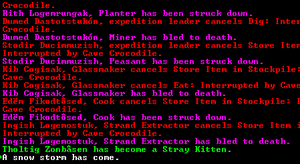 Crocodiles prefer hiding in caverns and out of sight. Except when they instead decide to go on a rampage through your fortress, then they prefer tearing dwarves apart.

Cave crocodiles are large, amphibious subterranean predators--the bane of fisher dwarves. Lurking in caverns close to the surface of the world, these animals are capable of smashing wooden buildings.

Because they are frequently found in the first set of caverns, cave crocodiles are one of the first major threats a fledgling fort faces. Plan accordingly, with either a decent military or a good trap line.

Capturing or hunting cave crocodiles can be highly rewarding. These animals have a tremendous value as pets, and their butchering returns are worth four times as much of those of domestic animals. In addition to the standard meat and bones, cave crocodiles also produce gizzard stones, a sustainable source of stone decorations. Cave crocodiles are also one of the most prolific egg-laying animals, making them an ideal choice for egg production and meat processing. Cave crocodile hatchlings require two years to grow to full size, and three years to reach adulthood.

Cave crocodiles will occasionally show up as mounts for goblin siegers. They act both as powerful warriors against your military and as powerful battering rams for breaking down any wooden buildings you may have. See the building destroyer article for more information on how to prepare for this. Cave crocodiles captured from goblin sieges cannot be entirely tamed, and may remain aggressive towards your dwarves and pets; it is best to exercise caution when handling them.

Some dwarves respect cave crocodiles for their strength.