A huge monster in the shape of a sloth.
Not to be confused with giant sloth bears

Giant sloths are oversized variants of the common sloth. Like the other sloth creatures, giant sloths do not have a reduction in speed, making them just as fast as many other animals. Despite their unexpected speed, giant sloths are not particularly dangerous, even when serving as mounts during a siege.

Giant sloths can be captured, tamed, and bred for meat or pets; though there is nothing to recommend sloths over other non-grazing giant creatures. Some dwarves prefer giant sloths for their "slow movement". 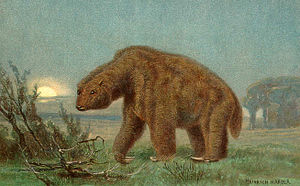 An artist's depiction of a Megatherium, or giant sloth

Unlike many giant variations in-game, giant sloths are notable for actually having existed in the real world (though currently extinct). The closest species to a giant sloth was Megatherium (although other similar species included Eremotherium, Promegatherium, and Prepotherium [1]). It was roughly the size of a modern-day elephant, making it one of the largest land mammals of its time period. It lived in South American woodlands and grasslands. [2]

Interestingly, giant sloths in-game aren't as large as some other giant animals (in addition, they are only a measly 40.36 times larger than sloths). They do not produce nearly as much food as an elephant, despite their ancestors being nearly the same size.