A small ground-dwelling bird. It has a featherless head and eats seeds and insects. It moves about in groups.

Being roughly half the size of a common chicken, guineafowl are at the lower limit of butcherable creatures. About half of the fully-grown animals will only produce a skull when slaughtered, no meat, fat or skin. While guineafowl are more useful for egg production than butchery, other, larger poultry also produce more eggs. 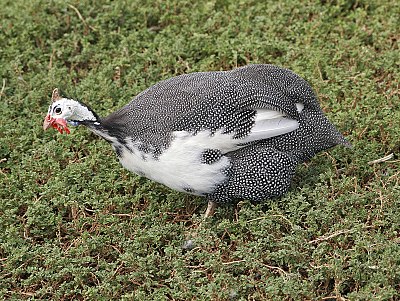 Admired for their social nature.
Retrieved from "https://dwarffortresswiki.org/index.php?title=v0.34:Guineafowl&oldid=186226"
Categories: