A small bird of prey that is capable of great speed. They dive on unsuspecting vermin.

Peregrine falcons can be found in almost every biome, excluding oceans, glaciers, and tropical rain forests. They take great delight in killing as many vermin as they can; it would be wise to order your dwarves not to collect outside vermin, unless you don't mind your refuse stockpiles being filled with remains. While females are simply referred to as peregrine falcons, males are known as tiercel peregrines. While they are the fastest birds in real life, reaching dive speeds of 200+ mph, in Dwarf Fortress they share the same base speed as many other creatures and do not have a "dive" attack.

Once tamed and domesticated, peregrine falcons make for a great cat replacement. They hunt vermin, fly, don't adopt owners and their births are easier to manage through eggs and nest boxes. As a bonus, the eggs can be cooked and consumed by dwarves. 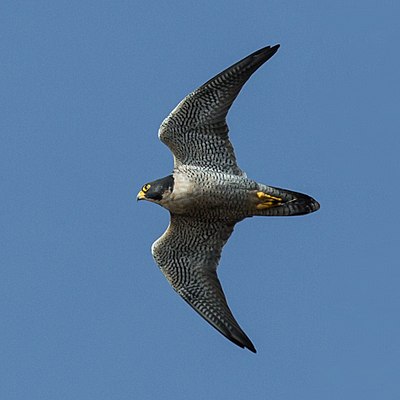 Admired for their ability to dive through the air.
Retrieved from "https://dwarffortresswiki.org/index.php?title=v0.34:Peregrine_falcon&oldid=195552"
Categories: