Not to be confused with wrestling throws.

Thrower is the combat skill associated with throwing objects at creatures, with the intent of killing them. Higher skill determines the accuracy and damage of thrown objects. Note that any object can and will cause serious damage when thrown, including socks, roaches, and even water. Thrower is not to be confused with the Misc. Object User skill, which is about using non-weapon objects in melee combat.

In fortress mode, a dwarf who is tantruming may pick up and throw an object. Doing so gives the dwarf experience towards throwing. Otherwise, dwarves will never use throwing in fortress mode. 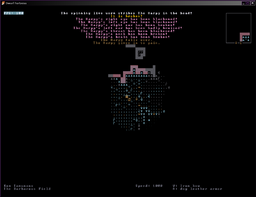 A funny example of overpowered throwing.

In adventure mode, throwing is an excellent way to roll the dice before close combat, essentially giving the chance for the opponent's vital organs or extremities to be damaged (plus any bonus that may come with the damage - for example, sightless monsters or weaponless guards). Furthermore, anything can be used as a weapon. Silt, pebbles, and vomit have been witnessed colliding with opponents, with devastating results (two or three handfuls of dirt can take down a wolf, for example).

At the moment, an excellent way to level up your throwing skill is to collect many items or a huge stack of coins and throw them directly under you. This, combined with an endless supply of vomit, soil, or small rocks, can increase your warrior's attributes and your throwing skill to Legendary in about ten minutes. It is unknown whether this will be tweaked in coming releases. Interactions that use the effect [MATERIAL_EMISSION] will train the thrower and archer skills, so spitting in adventure may be used to train as well.

Another amusing throwing bug is that throwing is not proportionate to adventurer strength. A human throwing a dragon corpse a few tiles is perfectly possible, although it may or may not be as efficient as just throwing a weapon.

Most things you throw will do bludgeoning damage, however, there are some items that you can throw that do different kinds of damage. Although it's not as effective as using a bow/crossbow, you can throw arrows and bolts and they will do piercing damage (and, as an added bonus, you will be able to pick up the ammunition afterwards). You can also throw things like swords and axes and do slashing damage, but the attack type is randomized (ie, you may end up hitting with a pommel strike). At high levels of thrower, gold and silver coins can be used to devastating effect against unarmored opponents, often chipping or fracturing bones. Given their light weight and ubiquity, they provide a reliable source of ammunition to cripple an opponent before the fighting begins. There is even a report that throwing a fluffy wambler can do significant damage as seen here: [1]