Giant bats are much larger versions of the common bat who inhabit subterranean caverns, inhabiting the upper layers. They are over three times the size of a dwarf, being as heavy as a llama, and as such they prove to be a genuine threat to civilians; while they spawn individually, giant bats can quickly fly down to an unaware dwarf and make quick work of them, or sneak through unsecured entrances and cause havoc inside of the fortress. All giant bats are born with Legendary skill in climbing.

If captured by cage traps, giant bats can be trained into high-value pets. They can also be trained into hunting beasts, though not as war ones. Like all trained animals, they will not fly, making them a bit less useful. If a breeding pair of giant bats is captured, they can also be used in the meat industry; while they produce less meat than other "giant" creatures, giant bat butchering returns are worth four times as much as those of common domestic animals. Giant bats are exotic mounts and are sometimes seen being ridden by goblins during sieges.

Giant bats are notorious for their body structure, which is based on the HUMANOID_NECK_FLIER template. This means they actually possess functional hands in their wings, which they have been at least once reported to use to wield weapons and strike people with them, much like a giant desert scorpion.

Some dwarves like giant bats for their terrifying features. 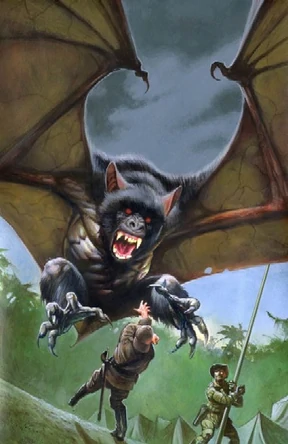