A gigantic spotted cat. It is possibly the fastest animal on land and is found in the savage wilds.

Giant cheetahs are massive, strong and carnivorous animals, roaming savage tropical areas. They are roughly 11 times the size of their normal-sized cousins. Baby giant cheetahs are slightly smaller than a standard cow. Giant cheetahs may also appear as mounts during a siege.

Captured giant cheetahs may be tamed and kept as pets, trained for hunting or war, or used as livestock for a meat industry. While they do not produce as much meat as other "giant" creatures, giant cheetah butchering returns are worth four times as much as common domestic animals.

Despite their much greater size, giant cheetahs cannot sprint any faster than normal ones. 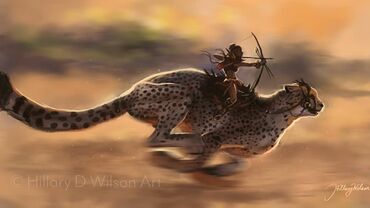 Like an entire fortress with teeth that can run faster than you.
Art by Hillary D Wilson
Retrieved from "https://dwarffortresswiki.org/index.php?title=Giant_cheetah&oldid=285313"
Categories:
Hidden category: