A huge brown creature found in temperate woodland. It is known for its ferocious attack, usually when it or its young are threatened.

Grizzly bears are large, tough mammalian carnivores that inhabit temperate forests and taigas. They may be drawn to your fortress in search of food; they will locate and consume any food and drink that your dwarves have carelessly left lying around. This can be particularly fun for new fortresses without a seasoned military, when their entire food and alcohol supply is destroyed in moments, and don't expect an unarmed and unarmored dwarf to win against a creature that's more than three times their size. Grizzly bears are very rare; such that only two to three of them will exist in a single region before they are considered locally extinct. They'll also not spawn during the winter, mimicking real-life hibernation.

However, the above tactic makes them pretty easy to trap in a cage trap. Make a small food/booze stockpile and surround it with cage traps on all sides. Grizzly bears will be attracted to the food and booze, and become trapped in the cage trap. They can then be trained into valuable exotic pets. Trained grizzly bears can be further turned into war and hunting beasts, being a popular choice for war animals since they are large and strong enough to do some serious damage. They are also frequently available from elven caravans, as elves tend to live in temperate forests. Should you butcher them, products made from their parts are 3 times more valuable than those made from common domestic animals.

Much larger and stronger than your regular dog, war grizzlies can make fast work of a goblin ambush if they aren't outnumbered. Their powerful jaws can puncture straight through common iron mail, making a nice snack out of unprepared foes. Having a couple of Elite Marksdwarves with 10 bears assigned is a splendid idea, as the bears will act as a biting meat shield, while your crossbowdwarves take care of the tougher enemies the bears can't handle. Grizzly bears are exotic mounts and are sometimes spotted being ridden by humans during sieges. 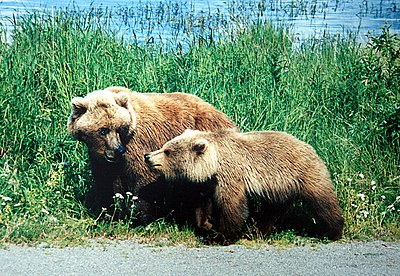 In world gen, a green grizzly bear with mental problems will form a relationship with a porcupine. But this always ends in fun for the porcupine. They choose red porcupines more over regular ones.