A horse-like creature with a spiral horn growing from its forehead.

Unicorns are large creatures found in good-aligned forests and shrublands, where they spawn in fairly large herds. Somewhat larger than the average horse, unicorns will normally flee when approached by a dwarf, though if cornered, they will attempt to impale them with their horns. Despite this, a crossbow-wielding hunter or an equipped military squad will usually fare well against unicorns, providing your fort with a big equine meal.

Unicorns can be captured in cage traps and trained into very valuable pets, and tame ones may be brought in elven caravansv0.44.07. While they're not considered domestic animals to elves (like beak dogs are to goblins), they're usually found under their employ anyway, and may appear as attack animals or mounts in the event of a siege. Raiding an elven settlement may lead your dwarves to bring numerous tame unicorns to your fortress as spoils, which is the easiest way to get a hold of the creatures. They give a decent amount of returns when butchered, and products made from their parts are worth four times as much as those made from common animals, making unicorn theft in the name of profit an attractive proposition. 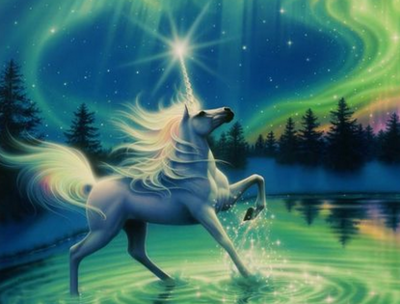 The beauty of embarking in a good biome.

It's been rumored that some unicorns (especially purple ones with an affinity for books) are able to cast spells, making them among the first creatures to use magic, but this has yet to have concrete proof.

It is also believed that the movement of the sun and the moon is also due to some form of equine magic, but that's just silly, as it implies geocentrism, and we all know that Armok likes his worlds flat and square.

Tales about a noble human falling in love with a unicorn and teaching her regret are most definitely probably just that, tales. Although beasts made of flame, which feature prominently in the most widespread version of the story, are of course a common occurrence. Investigations about the story's veracity have mostly concentrated on finding a so-called "Man's Road" in the sea. The lack of safe sea travel alone makes finding that road nigh impossible. That's all I've got to say.