A large monster in the shape of a mantis.

Giant mantises are large (size 200000, like most giant arthropods) fliers that enter your map alone, and spend most of the time flying all around the map. They are not aggressive if left alone, but they have the unique ability of being able to latch on flesh with their forearms, making them quite good fighters if pressed.

Giant mantises can be tamed, but they don't breed, live only one year, and lack the characteristics of a good attack creature, despite how cool it would be to have giant mantises as fortress defense.

Some dwarves like giant mantises for their predatory nature and their grasping legs. 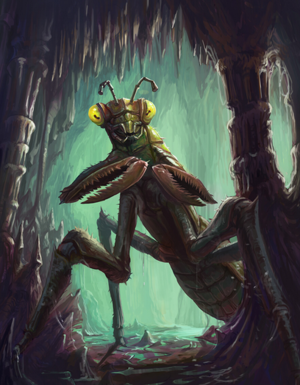