A gigantic blue and orange bird.

Giant cave swallows are the much larger cousins of the common cave swallow, who are a quite common sight at the first and second layer of the caverns. Nearly as big as trolls, these birds appear individually and will meander the underground aimlessly, and despite being carnivorous, they are benign and will rarely fight back if provoked by dwarves, making them easy prey for your marksdwarves.

Giant cave swallows can be captured in cage traps and trained into valuable pets. They can further be trained into hunting beasts (but not war ones) and assigned to your hunters, where their great size will really shine. The birds can also be put on a nest box for them to lay a meager amount of eggs or simply butchered for a nice quantity of returns - products made from giant cave swallows are worth twice as much as those made from common animals. Giant cave swallows are exotic mounts and may be used by goblins during sieges, allowing them to fly over any moat or similar obstacle put between them and your fortress.

Some dwarves like giant cave swallows for their coloration. 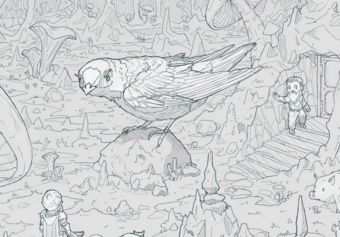 "Someone make a quick painting before it flies away!"
Art by Devilingo
Retrieved from "https://dwarffortresswiki.org/index.php?title=Giant_cave_swallow&oldid=287300"
Categories:
Hidden category: