Lye is a material used to make soap, and can also be used to make potash*. Lye is made by a lye maker at an ashery, and requires 1 bar of ash and an empty bucket; ash is made from wood by a wood burner at a wood furnace.

(* Although potash is more easily made directly from ash, which is also the precursor to lye.)

Lye is moved from buckets into a barrel if you have a food stockpile with "lye" enabled* and a spare barrel. One barrel can hold 100 units of lye.

Lye can be ordered in trade agreements. Each barrel of lye brought by a caravan contains 10 units.

Lye freezes in cold weather - you'll have to wait until it thaws in order to make soap. Careful application of magma can help to unfreeze lye, or they can be moved to a warmer underground location. There is no entry for frozen lye in stockpile menus, however, so dwarves will not haul a frozen lye barrel to any type of stockpile. Barrels containing frozen lye can be moved underground to thaw by dumping them to a garbage dump, but if you use the Designations Menu to mark the barrels, the frozen lye stack will be marked for dumping separately, and when it is hauled inside, it will melt into a useless puddle on the floor. Instead, use k-d to mark just the barrel for dumping, and its contents will go with it. If your trade depot is outdoors in freezing weather, frozen lye barrels (along with milk) will appear as empty barrels in the Trading screen. They can be distinguished from empty barrels by having a price 20☼ higher than the price of the barrel, or by viewing their contents. If purchased, these will also have to be dumped to thaw the lye, or will have to wait for better weather.

* Be aware: Lye is located under "Misc. Liquids" on the 2nd page of the Food Stockpile screen, and under "Liquid" in the [z] Stocks screen. 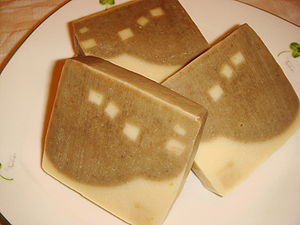