Oil is an ingredient in cooking and soap making, made by pressing one of the several seed pastes or fruit at a screw press. The press squeezes the material, releasing the oil, which is stored in a liquid-capable jug. The oil can then be used to supplement a fortress's food supply, or can be combined with lye to make soap.

The following crops produce seeds that can be milled and pressed into oil:

Oil will be used in the kitchen when 'prepare meal' tasks are queued if it is enabled in the Kitchen tab in the Status screen. 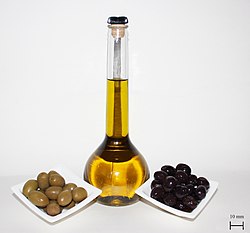 Cooks will only cook oil and other fluids as a last resort, instead preferring to cook solid foods with solid foods. Bug:2393 For more information, see the kitchen page.