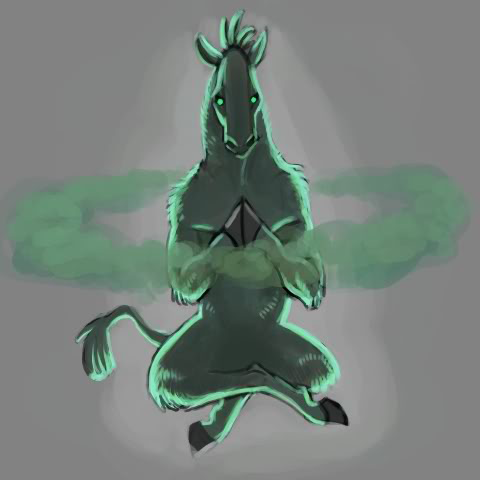 "Etar Patternedtombs was a mint green demon. It was the only one of its kind. A gigantic feathered ass twisted into humanoid form. It undulates rhythmically. Its mint green feathers are patchy. Beware its deadly gas!" (post).

Demons inhabit Hell. At this time it appears that they are randomly generated at worldgen, creating unique fun for every player. Examples of possible demons include giant centipedes made of ash that hunger for blood, eyeless mosquitoes that spit toxins, and emaciated fruitbats with giant clicking mandibles. Demons begin to spawn exactly one frame after you open Hell; the amount spawned can range from 10 to over 100. As long as Hell is unsealed, demons will continue to wander in from the edges of the map indefinitely, due to having populations that are (functionally) infinite.

All demons share certain traits, however. They are represented by an ampersand (&). They are all able to swim in and breathe water and magma, destroy buildings, speak and learn. Furthermore, they are immune to traps, pain, fear, nausea, stunning, exertion, dizziness, fevers, fire, any sort of poison, and extremes of heat and cold (even if made of materials that would suggest otherwise). They are very large (size 10000000, smaller than a megabeast, but significantly larger than a giant and 167 times the size of a dwarf). They don't require sleep, food, or drink. All non-unique demons start out at Accomplished skill level in the following combat skills: wrestling, biting, striking, kicking, fighting, archery, dodging, and observing. Unique demons start out at Grand Master in the same skills. Both unique and non-unique demons have [CAN_LEARN], so any that you face may well have developed their skills to a higher level than they began with; however, their skills cannot rust to a lower level. Demons receive large bonuses to every physical attribute except agility, and to the mental attributes of focus and willpower (also analytical ability, memory, linguistic ability, and social awareness, but those are less relevant). Many, but not all demons, are capable of flight. Inorganic or zombie demons are especially difficult to kill; literally tearing them apart (severing their lower and upper bodies) or decapitating them will kill them, but this is far beyond the capacities of an ordinary dwarf, and if the creature is a blob (whose lower and upper bodies are inseparable), it will be truly immortal. If you have deactivated compressed saves, the raws for given world's demons (as well as forgotten beasts, titans, werebeasts, etc.) can be found in the world.dat of its save folder.

Certain types of demons, those described as "being twisted into humanoid form" and marked with [UNIQUE_DEMON] instead of [DEMON] in world.dat, will occasionally escape the underworld and earn/create statuses in goblin or human civilizations; among humans, they pose as gods, while they tend to take over goblin civilizations by force.

These unique demons can be taken prisoner in world-gen by civs. If taken by a human civ you can ask them to join you and you will have a next to unkillable super soldier on your side. In fortress mode, demons controlling human civilizations may pay a visit to your fort as diplomats, and although they are not aggressive they may cause quite a bit of fun in the process if they have toxic secretions. Goblin law-giver demons may arrive on a goblin siege and are most of the time far more dangerous.

Although the exact algorithm used to produce demons is unknown, something of the algorithm can be gathered from the string dump and analysis of demons. When generating a demon, the game begins by picking a creature from a predefined list, which is fixed and includes creatures not found in vanilla DF (such as anteater, ankylosaurid) and more general shapes (blob, quadruped, and humanoid). It is granted spheres, with a preference for "negative" spheres like misery, death, and torture. If inorganic, a material will be chosen (such as salt, fire, ice, or vomit). If organic, it will get some sort of randomly-colored covering (such as feathers or hair) and/or have some feature (such as its eyes, nose or skin) removed. It will be granted a few "extra" features, like a tail, a trunk, or a shell, and a flavorful descriptor (such as "it knows and intones the names of all it encounters"). It may get some sort of special attack (such as a poisonous sting, toxic breath, fire breath). It will finally be given a name consisting of an adjective and a noun. The adjective will be based on the creature's color, its material (such as "inferno" or "snow"), what animal it's shaped like, or a descriptor (such as "winged" or "skinless"), and the noun chosen from the following list: demon, devil, fiend, brute, monster, spirit, ghost, banshee, haunt, phantom, specter, or wraith.

Of all of the challenges facing a player, defeating a demon horde is probably the most difficult, unless you are using certain trap schemes -- and even then, you will need to take special precautions.

Containment is the simplest strategy for dealing with demons. A simple constructed wall will block any demon. Because of their building destroyer status, demons cannot be contained via locked doors. However, indestructible artifact-quality portals can stop them, as can some bridges. As building destroyers can only destroy objects on the same z-level a floor grate or forbidden hatch cover on a staircase/channel will also block movement. It may be difficult to lure demons away from artifact furniture, should the area need to be accessed to reset a trap. If using bridges, be aware that any raising bridge that lands on a demon will deconstruct, and that demons can easily have internal temperatures greatly exceeding the melting points of steel or iron, leading to deconstruction as they pass over them. Because of their vast numbers, containment is an important part of any attempt to defeat them-- fighting two groups of 25 demons is much easier than fighting one group of 50.

One particular gentleman, AussieGuy on the Bay12 forums, has found an ingenious method for disposing of an entire demonic invasion at once: a stupid dwarven trick known as "the dwarven checkerboard".(Source)

Because all demons avoid traps, trapping demons can be very difficult-- but not impossible. Demons become vulnerable to traps when they are webbed, so if you can find a way to get web onto your traps, the demons will be affected as any other creature (including your own dwarves!) would be.

Alternatively, advanced triggered traps may be used. Demons do not set off pressure plates, but if you can contain them, retracting upright spikes, casting them into obsidian, or caving a portion of mountain onto them are all effective. Any plan involving these kind of traps must involve both a way to bait the demons to where you want them and a way to keep the demons where you want them. Tame animals appear to work well as bait, but need to be replaced as they're killed. Bridges can be used to contain the demons, but be wary of the risks of deconstruction as described above.

Many traps need to be designed with the potential for extreme temperatures in mind. Obsidian trappers may find water used as the casting process boiling into steam before it contacts magma. Frequently, demons made of fire or steam explode on death, broiling nearby creatures and furniture. This effect can destroy upright spikes, leaving you with a trap chamber full of demons that you have no way to deal with. Demons do not destroy supports directly, but a hot enough demon may cause the destruction of nearby supports, just by virtue of the heat damage.

Ranged combat sounds appealing, especially in the face of demons that explode with unimaginable heat upon death, but should be considered carefully. Most demons have vastly more powerful ranged attacks than marksdwarves have. Demons made of weak materials can be easily killed or dismembered by bolts but inorganic demons composed of stronger stuff will only suffer chipped bones.

Fortifications are appealing, as they can be dug directly into adamantine without ever exposing your fortress to a path to the demons. Even demons made out of steam cannot pass through a fortification unless it is submerged in 7/7 water or magma. Demons with syndrome attacks may attack through fortifications even without a path, although they appear to do so less frequently than if they have a path.

Still, should you contain a group of demons composed of weaker materials, marksdwarves can be very effective.

Demons can be very frightening melee opponents, as each one alone is nearly the size of a megabeast, extremely fast, and have tremendous natural combat skills. That would be bad enough, but there tends to be pages of them rather than individuals. However, demons can still be defeated in melee combat.

Despite their powerful attacks, many demons are made up of very flimsy materials, such as salt, snow, steam, or filth. A strong punch can decapitate creatures like this. Some demons, however, can be made of much harder materials, and it can be very difficult to bring down a demon composed of mineral or armor-quality metal. Blunt weapons can be reasonably effective against weaker material demons by severing limbs and body parts despite blunt status, but are not nearly as effective against demons as they are against earthly foes that suffer from pain and blood loss; without internal organs or blood loss, piercing weapons are relatively ineffective. Good slashing weapons can reliably take down demons of any material type.

The challenge of melee combat is how to deal with an enormous number of strong combatants while protecting against area of effect syndrome attacks and death explosions. Restraining visibility via a labyrinthine battle ground is a good start. The area effects suggest meeting them with successive small waves of melee dwarves, but if the dwarves are too few, they'll be butchered by hundreds of angry demons before making a dent.

In all cases, your demon-fighting melee dwarves should be very well armed and armored (steel and adamantine) and Legendary in some, if not all, of the relevant combat skills.

Unfortunately, once the wave of demons has been dealt with, it's not yet over. Syndrome-bearing dust and blood may litter the battlefield and your survivors, and can be very difficult to isolate and contain. Some dwarves may carry burning items back from their encounters with very hot demons. Survivors should all pass through a shallow pool of water to wash them and their equipment of anything dangerous and to douse any flames. Any path used for the fight is best abandoned and walled up. Demons will continue to enter hell from its map edges, as wildlife do on the surface, but path differently from the initial wave, content to wander through hell even should a simple unobstructed path exist into your fortress.

Little do demons know that though their claws and fire cannot pierce the adamantine sealing them away, a simple copper pick can dig right through it with ease. Armok forbid these unholy creatures ever get their hands on one. At least they ARE able to be killed in battle, unlike the King of beasts.