A road is a construction that paves over a large section of flat terrain. Roads are most commonly used to give caravans a reliable path to your fortress from the map's edge. They are not strictly necessary, as a wagon is entirely capable of making its way over dirt or grass provided a 3-wide path exists the entire way; but without a road, you run the risk of trees growing in positions that prevent a wagon from squeezing through. A dwarf with the Architect labor must haul any materials to the site and design the structure before it can be finished by any available dwarf with Road Building labor enabled.

Dirt roads (b - O) can be constructed for free on any soil, removing mud and other contaminants and also shrubs and trees, as well as preventing new ones from growing. However, they wear away over time, and have to be reconstructed periodically - depending on the size of the road, this can be a hassle.

Paved roads (b - o) can be constructed with any building material, including stone, blocks, wood and metal bars. These roads are permanent, and use less material than paving the same space with constructed floors - yet paved road is a building, not a construction. To avoid the hassle of long-distance hauling, it is advisable to place a stockpile near the desired site for your architect to get materials from. Broken bolts do not show up on tiles with paved roads, so paving your archery ranges can keep them looking neat. The number of units of material needed to construct a road is given by the number of tiles the road will cover plus one divided by four (Tiles + 1) / 4. The material of the road is the material of the oldest item used in building it.

Paved roads cannot be built over water (except 'Brooks'). They can, however, be built on top of 'Ice Walls' (i.e. frozen water), but will fully deconstruct themselves if the Ice Walls they're built on thaw out. A simple work-around is to build constructed floors ( b - C - f) ) over the water, which you can (but don't have to) then pave over. Alternatively, a bridge can be used instead of a road, providing the body of water is no more than 20 tiles across.

During world generation, roads are created connecting human towns and dwarf mountainhomes. Dwarven and Goblin civilizations also create underground roads connecting their sites, which can be discovered in caverns after embark, or entered from above ground in adventure mode. World gen roads can consist of unpaved dirt or be made of constructed floors (made from stone blocks), and are not the same as player-constructed roads. Also, dirt roads are upgraded to paved roads after connecting 2+ cities of population 1000+ that are within a few market links of each other.

The hypothesis that roads "go ever on and on" has been tested and decisively falsified. Most roads end after running through at most a dozen sites. 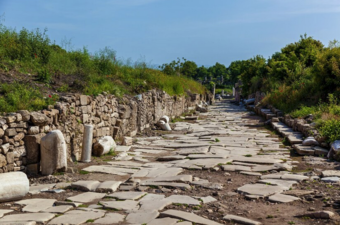 "...except the elves. They can take the long way around."
Retrieved from "https://dwarffortresswiki.org/index.php?title=DF2014:Road&oldid=265333"
Category:
Hidden categories: