Difference between revisions of "DF2014:Siege" 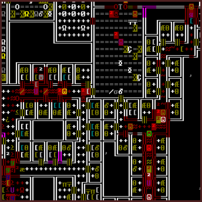 Sieges are large-scale assaults on your fortress by other civilizations, and a step beyond ambushes. Sieges are drawn from moving units advancing towards the fortress, whether from an army, a bandit group, or a necromancer's tower. They are announced with a full-screen message that differs depending on the attacking race, and the main screen showing the SIEGE tag at the top for the duration of the siege. A siege's objective is to exterminate every dwarf in your fortress, or die trying. It is possible to be sieged by all civilized races, with the exception of kobolds (who never go beyond ambushes) and subterranean animal people (who just don't attack at all). Enemy civilizations will begin to send sieges against your fortress once its population reaches 80 members, with the exception of the undead, who may attack at any time.

A civilization will be unable to lay siege if it can't reach your fortress site. Armies need to physically move to the location of your fortress; they are normally allowed a 30-tile radius of interaction (towers have 10 tiles), beyond which sieges are impossible. You will never get sieges if you embark on an island, or in a valley which is completely surrounded by mountains. If you want to make sure that a certain civilization will be capable of laying siege to you, then look at the "neighbors" view of the embark site finder when selecting your fortress site. 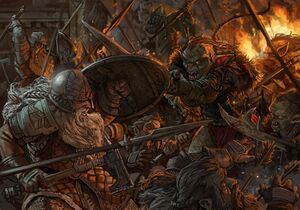 We hear the drums, they are coming...
Art by ncorva.

Usually, the tactics used by the goblins are no more sophisticated than charging in an open march toward your fortress and attempting to kill your dwarves. Goblin sieges often include groups of trolls and beak dogs, but may also include things like ogres, or cave dragons, that can break buildings and smash workshops. Unlike the squads, however, these 'groups' usually enter the map in a single tile, somewhat akin to arriving migrants. These war creatures usually possess random civilian classes, and show little of the organized behavior of the squads. Goblins may also bring fighters belonging to other races (previously kidnapped by snatchers), and if you're really lucky, they may be commanded by something particularly fun. Goblin sieges usually involve mounted squads, some of which can fly over whatever defenses you might have set up to stop them.

Elves use stealth squads, à la goblin ambushes, to hide their numbers and locations. It should be noted, however, that unlike goblin ambushes which cap at four squads, elves can come in massive numbers, atop mighty (and tasty) unicorns or other exotic beasts. Fortunately, unlike goblins and humans, who wear heavy armor and wield metal weapons that can cause considerable damage, the elves are very weak in battle - their weapons and arrows are made of wood, which will simply bounce off any standard metal armor, and they march into battle wearing easily breakable wooden armor, or even nothing but cloth robes and trousers.

Humans may also siege you if you let their diplomat die while visiting your fortress; if too many of their trade wagons get destroyed, if you trade with an elven nation the humans are at war with or if you raid their sites. Humans sometimes set up a camp near the map edge they arrived on, harassing wandering dwarves and waiting for you to come to them instead of blindly charging toward your fortress.

The dead walk. Hide while you still can!
Forms twisted from their nature, legion of the night. What hope remains?

If experiments are brought along, the latter message will be shown. Sometimes these "sieges" of experiments will be very small, consisting of only a few experiments and no necromancer.

Roving bandit groups nearby your fortress may also besiege it, happening potentially as early as the first year, making them an excellent source of surprise fun.