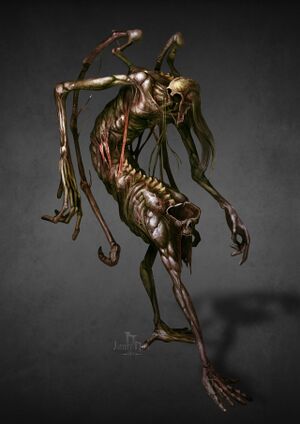 Experiments A-Z are procedurally-generated night creatures, "created" by necromancers or certain goblin leaders who experiment on captured citizens and livestock. They can be disallowed in advanced world generation.

Experiments are not born as such, but are created (turned from the experimental subject, per se) by the experimenter. There are failed and successful experiments, with the latter coming in many forms, depending on the source material. Every experimenter may create up to four "species" of experiment: one (sapient) humanoid, one small and one large creature type with 4 or more legs, and one giant amalgamation.[1] The giant amalgamation is created from multiple creatures, instead of just one, and is, as its name suggests, very large. Failed experiments, meanwhile, often come in the form of blobs, snakes, and worms, or armless bipeds with or without wings. The species, or even general shape of the experiment (save for the humanoid ones) is usually not preserved between experimentations (for example: horrible experiments on sheep may result in maggot-shaped creatures).

Experiments sometimes escape into the wild, and intelligent ones can rejoin civilization - in the latter case, they may become playable race options in adventurer mode. In fact, you can unretire an adventurer who died and was subsequently revived as a necromancer experiment, and their relationships will be preserved. Otherwise, experiments found at necromancers' towers will be loyal to their creator (following the "Identify yourself!" behavior and attacking if you give an unwelcome name), though, bizarrely sometimes, experiment children can be found in the prisons of a dark fortress among other snatched children.

Despite their various forms, all experiments possess certain uniform traits, being fanciful creatures who do not require any form of sustenance, sport immunity to pain, exertion, stunning, nausea, fevers or dizziness, and can survive both on land and underwater. They can also be building destroyers, unaffected by traps, see everything, and may even be generated with the ability to secrete extracts which can inflict night sickness, including the ability to fly. Their size varies depending on the type of experiment, with the smaller ones being comparable to a dwarf or human, larger quadrupeds being around the size of a horse or yak, and amalgamations being almost as large as a giant. All experiments appear to be associated with the spheres of deformity and night.

Unlike other night creatures, experiments are represented by regular alphabet letters, upper or lower case indicating size. Successful intelligent experiments are colored red, while failed creations and any others (quadrupeds, amalgamations etc.) are colored green. The name of the experimenter will always be included in their description, crediting them for their creation and telling the date they were created, even if you play as an adventurer experiment.

Experiments may, rarely, wear items like rings. They cannot become vampires, werebeasts, or necromancers, due to their supernatural nature.

Their names seem to be based on the creator, the place they were created, a deity (likely one associated with death or deformity), or just a generic menacing-sounding name. Examples are "Obler's Hand", "Severesuppers's Eye", "Demon of Night", "Xakedkicu's Mistake", etc. Nouns of sapient experiments are Demon, Eye, Fist, Hand, Soldier, and Warrior.