A spiny person with the head of an echidna.

Echidna men are animal people variants of the common echidna who can be found in savage temperate and desert regions. They spawn in groups of 1-5 individuals and are generally peaceful, as well as surprisingly resilient. Even crossbow bolts and whips seem to be unable to penetrate past their muscles, leading to long, drawn-out battles waiting for them to bleed out. This makes echidna men relatively useful for live training, or as bait in a devious trap. In terms of size, they are a little over half the weight of the average dwarf.

Some dwarves like echidna men for their spines and their egg-laying.

Echidna men practice a religion known as 'The Way.' They actively and enthusiastically seek out other worshippers of their deity, but seem unwilling to proselytize to those not familiar with their beliefs.

Echidna men generally find shows of strength to be more entertaining than comedy. Accounts of echidna men chuckling are few and far between.

Dwarven scientists have, as of yet, not determined whether echidna men possess 4-headed penises. 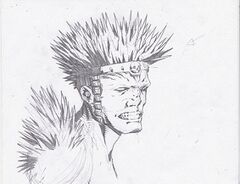 May or may not guard giant emeralds.
Art by Koza101
Retrieved from "https://dwarffortresswiki.org/index.php?title=DF2014:Echidna_man&oldid=254867"
Categories:
Hidden categories: