Platypuses are small, amphibious and somewhat rare creatures found inhabiting rivers, where they spawn one at a time. They are benign and smaller than cats, making them typically harmless to the average dwarf. Males of the species possess venomous spurs on their legs which they can sting enemies with in their kick attacks, leading to swelling and severe pain on the victim, but their benign and timid disposition means they'll rarely, if ever, poison dwarves. A newborn platypus is called a baby.

Platypuses can be captured in cage traps and trained into cheap exotic pets. Due to their tiny size, they produce few returns when butchered, and they lay fewer eggs than domestic poultry, making them subpar animals as livestock.

Some dwarves like platypuses for their bizarre appearance, their venomous spurs, their flat tails and their large bills. 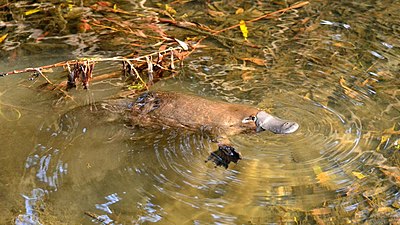 Admired for its bizarre appearance.

The river titan Platypus has come! An enormous beaver. It has a broad duck beak and it undulates rhythmically. Its river otter-like hide is patchy. Beware its poisonous sting!

Some tamed platypuses have been observed sneaking off to missions during the day to fight evil.