A small humanoid resembling a walking mushroom with arms and legs. It lives far underground near water and soil.

Plump helmet men are humanoid, intelligent versions of plump helmets who can be found at the second and third layers of the caverns. These creatures are nearly as heavy as dwarves and spawn in groups of 3-5 individuals who meander about aimlessly. They are non-hostile and generally harmless, and if confronted in combat, are easily dispatched by the average dwarf, as their boneless mushroom composition is very fragile to damage.

Plump helmet men are featureless - they have no mouth, nose, ears or eyes, though they can still see through [EXTRAVISION]. They are composed of fungal material called 'plump helmet man tissue' which is, according to the raws, edible, though plump helmet men cannot be butchered or eaten due to being intelligent beings. Due to Dwarf Fortress' item naming system, they turn into "Plump helmet man plump helmet man tissue" when they die. They are also remarkably resistant to fire and magma - Dwarven Science Experiments have shown that they can live for several seasons while submerged in 7/7 magma (while on fire).

Plump helmet men are similar to savage animal people in that they can join civilizations, normally being found in dwarven factions where they'll become full-fledged citizens. Plump helmet men are playable in adventurer mode, but come with one major disadvantage compared to other races; they cannot speak (they lack the [CAN_SPEAK] token, evident by them having no mouths), meaning they can't receive quests, trade or hire companions, among other things, which severely limits their ability to interact with others. Going on a murderous rampage as a purple mushroom man is still fair game, though, provided you keep their relative fragility in mind.

Unlike most creatures, plump helmet men can't be spawned in the object testing arena.

Some dwarves like plump helmet men for their similarity with food. 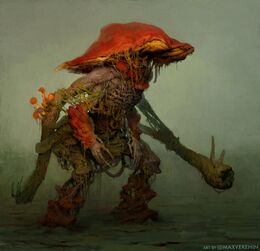 Tastes how he looks.
Art by Max Verehin

Plump helmet men are known for their clever jokes and games, as well as their innocent, almost childlike nature. This has led to them being universally beloved by all sentient creatures of the world, as well as dwarves, who find them both sweeter and more succulent than the farm-grown variety. For years, dwarves have been trying to find a way to brew these majestic creatures alive, but the scientific effort has been frustrated by the tendency of dwarven brewers to pounce on any plump helmet man they see and eat their way through the still-living myconid in an orgy of mushroom juice and drool.

However, beneath the dumb exterior, they have a darker side. They are secretly geniuses, who strive constantly to escape.