"Who dares to enter my house? I curse you!"

A mummy Ñ is the preserved body of a deceased ruler, placed in a tomb as a guardian of its contents. These undead night creatures arise to attack interlopers who have disturbed their long slumber, afflicting intruders with horrible curses for their crime.

(The way a mummy curse works, it zeroes all skill rolls intermittently, using a skill adjust syndrome. Due to the way syndromes are timed in combination with dwarf mode, time is cut into segments about 7 walking steps long, and your luck is bad for 20% of those time segments. So if you are attacked during one of your unfortunate times, it will go as badly as it can possibly go. There are many random rolls that aren't skill-dependent, though).

Mummies rest in every tomb and may be in catacombs beneath towns, fortresses and temples. Their coffin and slab will always be in a room together, surrounded by corpses they can command.

In tombs, mummies may be disturbed by bashing the door, taking items, or triggering traps. Approaching them without sneaking may alert them, and entering any tile adjacent to their coffin always will. Once awoken, they will unerringly home in on the intruder, even if unable to detect him or her. It should be noted that tombs are structured in such a way that the mummy's room is almost always in a location between the treasure rooms and the exit, almost inevitably leading to the player being intercepted by the mummy while trying to escape after looting. This could result in moderate to extreme amounts of fun, depending on if the corpses in the passageways have been cleared, ranging from the player getting away with a curse, to death.

Mummies are capable of raising the remains of others much like necromancers, and calling these minions against their foes. Therefore, it is strongly recommended that any skeletons or bodies near the room containing the mummy are cleared out to the best possible extent prior to an encounter. Mummies can only be killed by decapitation or bisection. Because rulers lose their title upon death, the mummies will be identified by their other profession (such as a beekeeper mummy).

A safe way to approach mummies, talk to them, and even potentially recruit them as allies is to become a night creature that undead are friendly with, such as a vampire or necromancer. If you do manage to get a mummy companion, use caution when passing through towns or forts. The mummy will begin to curse everyone in sight and even attack if it has weapons. Despite what you may think, grabbing what you want and leaving before they can get to you is not a good idea as they will follow you throughout the world. 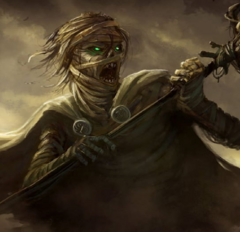 Do not unwrap until... ever.