A small monkey that can be found in forests and the streets of towns.

Gray langurs are small, thieving creatures that can be found in almost any biome, spawning in loose groups of 5-10 individuals. They will attempt to steal food and items from your fortress, and if confronted, they may attack dwarves to defend themselves, but generally stand no chance against a hunter or even an unarmed peasant in a one-on one fight. Dwarves react violently to the presence of gray langurs, generally leading to your civilians going on wild chases after them whenever they pop up in your map so they can punch the monkeys to death. All gray langurs are born with Legendary skill in climbing.

Gray langurs may be captured in cage traps and trained into exotic pets. They give a low quantity of returns when butchered, making them poor choices for livestock, but are fairly long-lived animals. Unlike most creatures, gray langurs reach adulthood at 3 years of age, though they're fully grown by the age of 2.

Some dwarves like gray langurs for their social nature and their vocalizations. 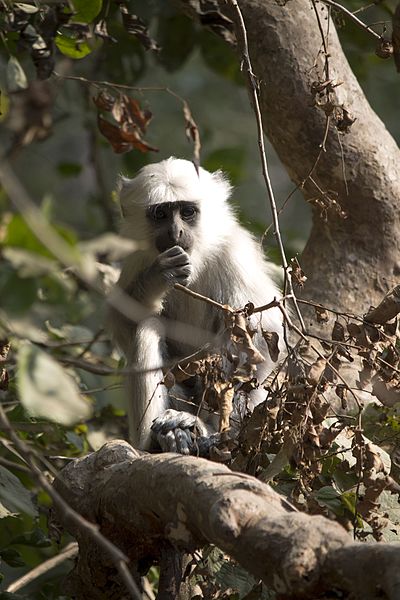 Admired for its vocalizations.

Although Dwarven ethics frowns upon the human habit of hunting for trophy animals, Dwarves have realized that there is nothing more merciful than dropping their current task to cave in the nearest langur's skull with their bare hands. Dwarves don't do this for fun, it's for the good of the fortress as a whole. Please don't miss the next lecture on Dwarven Ethics 101!