A large, round, lowland rodent. It lives in burrows in the ground and ventures out to eat.

Groundhogs don't produce much meat when butchered. With a very little pet value of 50, they still may be worth more to you dead than alive. An Animal trainer must be present in order to tame them. Unclaimed tame groundhogs will require a pasture. 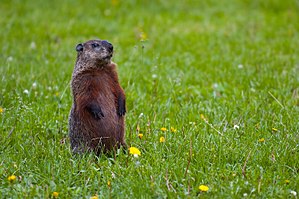 Admired by dwarves for their ability to burrow

Some humans think these little fuzzy creatures can predict the arrival of spring by seeing of its shadow. Most dwarves discredit this, but with almost 100% Predictability, some humans, and a few dwarves will worship them, especially if the object of worship is named Phil.