Cats will kill vermin in and around your fortress. They are fairly weak animals in combat (but combat can be quite random, and they have been known to surprise players on the rare occasion). They also seem to want to wander every room, hall and mineshaft at least once, perhaps due to some modeling of curiosity. Cats do not require any food.

Cats cannot be assigned as pets; instead, cats choose dwarves as owners. Cats will only choose dwarves who have the preference "admires cats for their aloofness". If a cat is caged, it will not adopt; however, it may adopt the moment it is taken from the cage (even if assigned for immediate butchering).

Cats are useful around the fort to prevent the unhappy thoughts produced by vermin and also for producing large numbers of kittens. If you can resist their cuteness and charm, and you get to them before they adopt a dwarf, cats can be butchered to provide a small, never-ending trickle of skin, bones and meat for your fort. As a breeding pair of cats only costs 22 embark points, this is well worth considering - just cage and/or butcher the kittens as they are born, lest the kittens grow to adopt a dwarf before their last voyage. (See Breeding.)

Cats are also infamous for the phenomenon known as catsplosion. If you are not careful, your cat population may explode causing your FPS to plummet. This can be hard to resolve due to the fact that killing pets causes a strong unhappy thought to their owners.

If you have a bunch of unwanted kittens, there are many uses for them. For example, use them as bait for a Forgotten beast if it has some sort of poison, in order to determine what the poison does.

Kittens can not be butchered for bones: only skulls will be created. Immature adult cats (less than 2 years old) may return about 2 meat, fat & bone, 1 skin, and 1 skull, or may only return a skull, while full adults (> 2 yrs) consistently return about 6-7 meat & fat. Unfortunately there is no in-game way to tell for sure whether a particular animal is an immature or full adult. (Note that other animals also have smaller immature sizes and butchering returns, but most other immature domestics return a more reasonable percentage of adult returns; for example, immature dogs consistently return about 50% of adult returns and include byproducts (e.g. bones & skin), compared to cats' 0-30% and sometimes no byproducts but the skull.)

If there's a desperate need to maximize cat-butchering returns, one can partly work around the lack of age info by slaughtering one-by-one the first-listed (therefore, usually, oldest) cats in the unit or animal screen until the returns drop to immature-sized returns, then waiting some months or a year for the remaining kitties to stew mature for a while.

Cats, by nature, will attempt to haul vermin to their owners. The owner will then dismiss the cat, at which point the cat will drop the remains for a dwarf with refuse hauling enabled to clean up.

For those who want to "spay and neuter" their current cat population you can open the raw data file "creature_domestic.txt" in your save directory, find the "Cat" entry, and remove [CHILD:1]. Adding it back will re-enable breeding if your population gets too low. If you modify the default raw file instead, your fortress won't begin with an initial cat population boom, so your dwarves will either have to trade for more cats or do without. 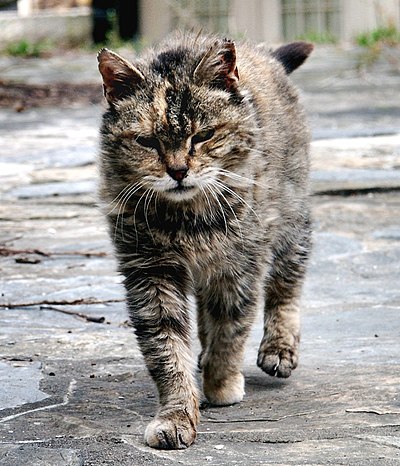 Admired for their aloofness.
Retrieved from "https://dwarffortresswiki.org/index.php?title=v0.34:Cat&oldid=211539"
Categories: