A large ferocious predator found in grasslands. It lives in groups of females and one male with a large mane. They hunt together and are capable of felling extremely large prey.

Lions are strong carnivorous felines found in tropical areas. They often appear in small hunting groups of 2 to 3 animals. Occasionally lions may appear as mounts during a siege.

Lions can be captured and tamed by an animal trainer. Although they have a moderate pet value, their butchering products are 3 times as valuable as common animals. Once tamed, they may also be trained for hunting or war. Because of their value, size, and utility lions can prove quite useful to your fortress if you can secure a breeding pair. 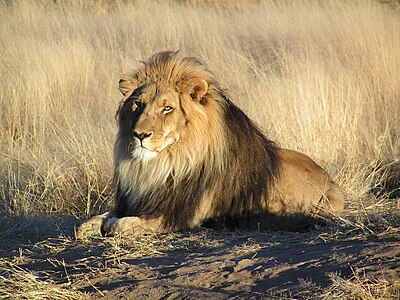 Curiously, dwarves only admire lions for their roars.
Retrieved from "https://dwarffortresswiki.org/index.php?title=v0.34:Lion&oldid=245135"
Categories: