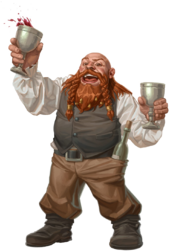 Alcohol is the favored drink of the dwarves; a dwarf will drink booze an average of five times per season to satisfy their thirst, and although they can subsist on water, without booze, they will work increasingly slowly. Dwarves like to have some variety in what they drink, and will garner a bad thought if they are forced to drink the same variety of drink repeatedly ("has been tired of drinking the same old booze lately"). Every dwarf likewise has preferences for various types of drinks. Thus alcohol is important both for maintaining your fortress (at a minimum) and (with some investment in variety) for keeping your dwarves happy.

Alcohol can also be used as an ingredient for prepared meals. However, meals made with alcohol no longer cause your dwarves to get drunk, and will not sate their thirst. 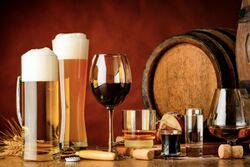 Dwarves prefer drinking alcohol out of a mug, cup, or goblet and will receive an unhappy thought for drinking alcohol without one of these three vessel types. These may be placed in coffers in designated taverns. Visitors will drink alcohol too.

Cooks will only cook alcohol and other fluids as a last resort, instead preferring to cook solid foods with solid foods. Bug:2393 For more information, see the kitchen page.