Giant cave spiders (also known as GCS) are far different from your regular cave spiders; those are just treats for your cat. Giant cave spiders are as big as grizzly bears and will make treats of cats, dwarves, and the occasional careless adventurer. You can find giant cave spiders in, obviously, caves, caverns and most underground areas. They are the most dangerous creature in the caverns, excluding some forgotten beasts, as they feel no pain, cannot be stunned, can poison creatures and have the ability to shoot webbing to ensnare their prey, with a range of 5 squares. If you see a giant cave spider in adventurer mode, an announcement, "You've spotted a Giant Cave Spider!", will appear.

Giant cave spiders are not a rarity, with dozens present in the underground caverns, deep below the surface. They can be extremely hard to kill. They do not pose a big threat to a fortress when undisturbed, but when a dwarf does disturb one, Armok bless the soul of the unlucky dwarf. On occasion, however, a lucky dwarf might pound one to death within a few attacks by punching its skull into its brain, which can be a godsend after an unfortunate cavern breaching exercise.

Giant cave spiders give live birth and do not lay eggs, contrary to what one may expect. They also can't be gelded.

In older versions, a lone giant cave spider could take on and fight equally with all of the semi-megabeasts and most of the megabeasts (with the notable exception of dragons, due to !!giant cave spider!! syndrome). They couldn't kill them, but not even a bronze colossus is immune to webs. They were more dangerous than cave dragons and the only thing in the caverns that could reliably win against them was a forgotten beast with webs or ranged attack. However, as of the latest version, a cyclops or an ettin will reliably kill a GCS one-on-one.

The web attack of a giant cave spider not only covers a wide area but also has a very short cooldown period, and as such, the creature is easily able to spam it and is able to take out entire squads with little trouble, making melee combat extremely risky. Ranged combat with crossbows is much safer in comparison, as marksdwarves can out-range a cave spider's web, though this does not make it flawless; marksdwarves have the tendency to charge at their foes (and as such, right into the webs) while the giant cave spider can quickly charge at them itself, plus their large size means they can usually shrug off multiple bolts before going down. The safest method to attack a giant cave spider is either to ambush it in a chokepoint (where your dwarves may get to hit it before it can web all of them), by firing bolts through fortifications or by shooting it while it is distracted fighting something else (such as your unlucky melee squad). Pray your squads do not waste time attacking the spider's limbs and go straight for the head, before the spider does the same to them.

Due to giant cave spiders only attacking the head of a webbed dwarf, a few dwarves armored with steel helmets should be a match for a lone GCS. The coding for all creatures sets headshots as the number one priority if possible, and the web ensures that a headshot is indeed always possible. You may want to avoid using untrained dwarves for this, though, because the spider will still counterattack if the dwarf misses, potentially landing a blow on an unprotected area of the dwarf. One way to minimize this problem is to make the dwarf wear full armour (the GCS will still latch on with its bite, however, helm or no, and can still kill a dwarf by shaking them by the head).

Due to the considerable value of giant cave spider silk, many players attempt to capture a live spider and set up a silk farm to boost their fortress's economy. While simply opening a path to the caverns and lining it with cage traps may eventually work, a much more effective method is to take advantage of one peculiar behavior of building destroyers: simply build a wooden door within the caverns and surround it with cage traps (to a distance of at least 2 tiles), and any giant cave spider (or giant cave toad, giant olm, cave crocodile, etc.) that wanders relatively close enough to the door will immediately charge toward it and be captured. Or, if you have enough mechanisms, cages and dwarfpower to spare, cage trap all the cavern exits – a good precaution in any case in order to keep things from wandering out and causing trouble.

Another thing that can be done with a captured giant cave spider is turning it into a pet. They possess a pet value of 2,500, making them the most valuable animals in the game who aren't cave dragons or megabeasts. It's wasteful to simply butcher them for meat, as multiple spiders can be captured and bred in order to create a very formidable fortress defense force. The spiders are born adults and as such cannot be turned fully tame, but a skilled animal trainer will ensure they never revert into hostility.

Giant cave spiders can be a very lucrative and nearly-inexhaustible source of silk thread for your weavers. The general idea is to expose the spider to a target, causing it to spew webs which can later be collected. Well-designed silk farms can maximize safety and production and greatly increase fortress wealth. 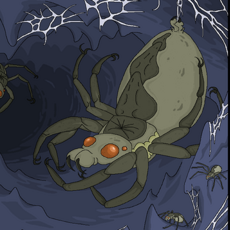