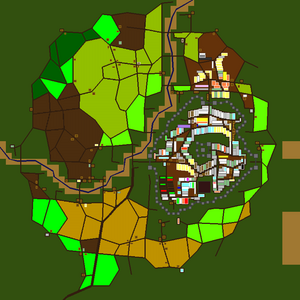 A town is a large site founded by human civilizations. The population and size can be determined by the map symbol representing it; from least to most populous: +, *, #, and ☼. Towns start out from hamlets, which can transform into one if there are no other nearby sites with a market. Roads link towns between other nearby towns and dwarven fortresses, as well as sites conquered by humans.

The population for each level of town is:

Adventurers spend much quality time in towns - they can come to trade, speak, or entertain the townspeople, and occasionally to slay those who have invited their wrath. Towns' taverns are a popular destination for many adventurers; they are the only sources of alcohol in human settlements and provide excellent entertainment, which includes performances and the occasional drunken brawl. Other people of interest include:

At the heart of a town is a walled stronghold, garrisoned by many soldiers. Inside of the keep can be found a lord or lady, other high nobility, and men-at-arms willing to follow you unto death. If the town is the civ's seat of power, then the law-maker will also reside here.

Since .47.01, keeps have had their households expanded – most human keeps will have a variety of members, some familiar from fort mode, like doctors and executioners, and some related to the expanded city, like judges, fire commissioners and sewer administrators, and others just plain household staff, like the housekeepers and chefs. The vast majority of these don't have interesting game mechanics associated with them tied to their positions, but many of them are caught up in some scheme. 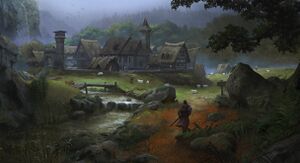 You could smell the bakery through the image.
Art by KlausPillon

Outside of the keep is the realm of the bourgeoisie. Commuters and travelers walk among the densely-packed houses and shops in narrow streets, while stray domesticated animals roam the muddy alleyways and pastures. Vast shopping districts are major trade centers. Other buildings include warehouses (which can be ransacked without repercussion) and wells. Common structures include taverns and temples, but libraries are very rare. 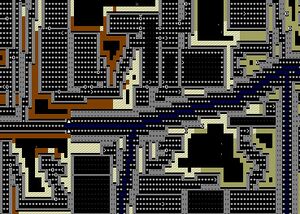 Below a town are several subterranean structures: dungeons, catacombs, and sewers. All three can be present at once, and frequently connect and overlap each other. Tombs may also be present alongside catacombs. Criminals, outcasts of society and various subterranean creatures hide in the dark passages. They are common destinations for those looking to finish a quest, gain reputation, or search for valuable loot.

Dungeons reside below the keep, while catacombs reside below temples. Both buildings are almost always present - sewers, on the other hand, can only be found in more developed towns. The presence of a sewer in a town can be confirmed by the presence of floor grates in the middle of streets – accessible via small and elusive entrances above-ground, or by diving below nearby waterways.

Legends mode entry about a town being sacked