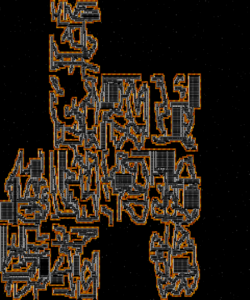 Catacombs are subterranean human-made structures constructed to inter deceased members of their civilization. They are located in towns, accessible by traversing below temples. Catacombs occasionally connect to tombs, which specially hold the remains of dead rulers.

Rock passageways and chambers are littered with skeletons. Some chambers contain multiple coffins which house the corpses of historical figures, accompanied with grave slabs marked with information of the deceased. Loot, primarily clothing, are scattered throughout the floor. Statues can also be found. Knocking them down will not anger any gods; that must be done at the temple.

Various hostile and nefarious critters such as kobolds can be encountered in catacombs. Criminal organizations may move their headquarters to catacombs. 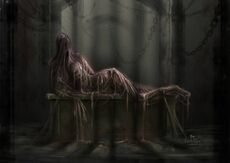 Where we wither? Or mummies' dinner table?
Retrieved from "https://dwarffortresswiki.org/index.php?title=Catacombs&oldid=276513"
Categories:
Hidden category: