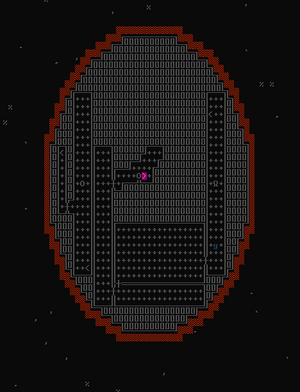 The spires constitute, if not are, the main towers of dark fortresses. They can be accessed by an entrance at ground level guarded by goblins, trolls, and beak dogs. Going upwards will lead to the throne room which houses the demon or goblin master. Traversing downwards will uncover several levels of long tunnels with prison cells containing kidnapped children. Below, past the prisons, are incredibly deep, enormous, circular open halls with a long series of treacherous, winding stairways and ramps that lead further downward - often at least a hundred levels. At the very end will be a strange, purple staircase simply named as an "Underworld Gate". Beyond the portal are the lowermost series of rooms which eventually open up directly to the Underworld, where there will be demons waiting to have fun.