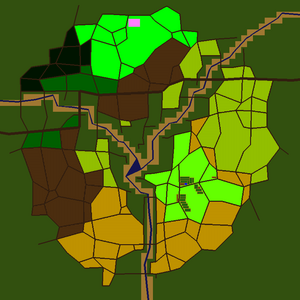 Hamlets are small sites built by humans, forming the rural areas of human civilizations. Populations in hamlets are low, and peak near one hundred residents, in contrast to towns; thus, hamlets are comparable to dwarven hillocks.

Hamlets are composed of a mead hall, a well, groups of houses, and occasional small shrines, all surrounded by immense fields of local crops, meadows, and pastures, with dirt roads running through the entire area. The mead hall houses the local governing body including the lord, other nobility, and hearthpersons, and is found near the edge of the hamlet. The well and houses are found near the center, usually by the side of a road. The houses often are inhabited by commoners, and may have a table and a cabinet containing leather clothing, but not beds. Bags containing the local crop plants may also be found in houses.

Adventurers may ask the inhabitants of buildings for permission to stay the night, and can lower and raise the bucket at a well with u to get water. Stray tamed animals can often be found wandering throughout the hamlet, that can be claimed as pets, pack animals, or mounts, depending on the type of animal (or the larger ones can be killed and butchered for meat and bones). Many of the plants in the surrounding fields can be gathered from, though not everything gathered will be edible, depending on the season and the adventurer's dietary needs.

In the rare case that a human civilization is nearing death and all towns have been destroyed, a hamlet may become the seat of power, and the mead hall will be additionally used as the throne of the law-maker.