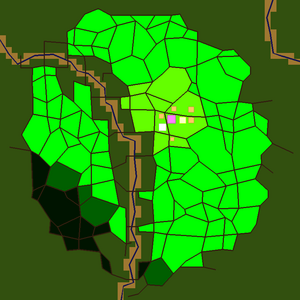 Hillocks (Ω) are the dwarven equivalent of hamlets, a type of site constructed above-ground and usually on the peripheries of dwarven territory. Hillocks consist mainly of various "hillocks", round hills that have been hollowed out and installed with a door. Some hillocks (where terrain doesn't permit isolating a small hill) consist of a small room linked to the surface by a short stairway, and covered by a hatch. Dwarves who inhabit hillocks are typically described as being "hill dwarves".

Some of these structures will be referred to as drinking mounds, usually populated by various dwarves quite aptly titled drunks. There are also civic mounds and castle mounds, generally inhabited by the various local nobles and soldiers.

Dwarven hillocks are not the most comfortable place to rest at night, because a lot of dwarves come there to rest, and a game may freeze really hard when characters and local inhabitants wake up, regain consciousness, get stunned again and stumble upon each other, but it is still better than fighting off the native wildlife.

In fortress mode, dwarven hillocks may be peacefully founded close to your location and pledge their allegiance to your government, becoming economically linked to you. You can interact with them through a messenger and either ask for specific workers to come to your fortress or expel your own dwarves to the hillocks. Alternatively, you can conquer already-existing hillocks and gain control over them through force. Having multiple sites like hillocks linked to your group is necessary for the fortress to gain a baron (and by extension, a count and a duke).v0.44.11 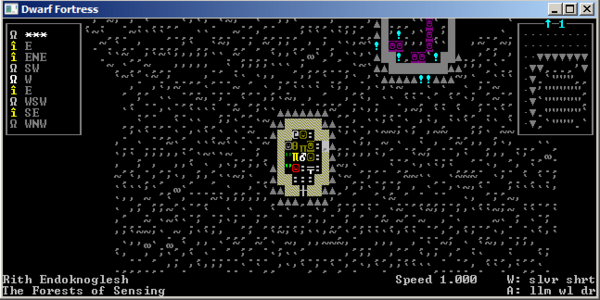 Inside a modest dwarven house in a hillocks. Being really small, it is completely furnished, has a container, a cabinet, a chair, a table and bed. A drinking mound is nearby too, but it is essentially an empty hall.
Retrieved from "https://dwarffortresswiki.org/index.php?title=Hillocks&oldid=277301"
Categories:
Hidden category: