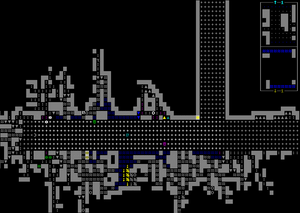 An underground tunnel in the caverns with stairs leading down to a mountain halls. Ahead the way splits off to other dwarven sites under the mountains.

A tunnel is an underground dwarven construction that connects generated fortresses and mountain halls together. Like roads, they are built during the world generation. Tunnels are located at the first cavern layer, and tunnel walls are frequently exposed to the environment. They are paved with rock blocks.

Fortresses can be embarked over tunnels. Tunnels are open at the edge of the map, allowing easily accessible fun. They can be blocked off by constructing walls.

Tunnels are the most convenient way for adventurers to travel underground. Fast travel is allowed along tunnels, unlike other underground areas. They provide a direct path to dwarven mountain halls from the surface.

In legends, viewing the history of dwarven civilizations will mention tunnels they've constructed. Tunnel names will include words like cave, deep, passage, corridor, and hall. Unlike roads, there are not separately constructed or named bridges.