After world generation, game worlds continue to develop and advance while time passes in-game, simulating off-screen various activities in the world outside of the player's influence and without their direct input, this is regarded as "world activation".

World activation happens when you start a new fortress or adventure mode game, then calendar is advanced by two weeks every time. Otherwise, it happens as time passes as you play at normal fortress/adventurer speed. You can play many games of fortress and/or adventure mode in the same world, each building up its history.

Types of activities that are simulated during world activation:

The various positions of nobles will either be inherited by another historical figure, or assigned to a new historical figure by the parent civilization when the position is vacated or they have an unfortunate accident. Conflicts over succession and illegitimate site ownership can emerge, and armed usurpations and insurrections can take place.

Existing NPC sites are conquered, liberated, defended, destroyed, reclaimed and new sites are created[1] while playing. Bandits will loot villages, armies will conquer cities, and forgotten beasts will ransack fortresses. Abandoned dwarven fortresses can be reclaimed by the player later.

Consequently, all kinds of creatures and groups travel around on the world map. However, others teleport. No, really.

The rest physically travel on the map, including: 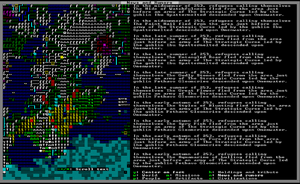 Screenshot showing Goblin civs prioritizing conquering the Elves down south above attacking the player fort (here highlighted with a yellow 'A' due to the rumour of artifacts.)

Armies move around the map while playing, for various reasons, including site invasion (not just to the player site), harassment, searching for work, reclamation of sites and more. As invaders need to actually travel the world map to get to your site, embarking close to a site of potential invaders increases the chances of an invasion. Other factors that influence the probability of an invasion are the "effective" population of said site[Verify], in other words, how many soldiers the site can spare to attack you. While a site may have a high population, it may be occupied with other, more important campaigns than the player's site.

The asterisks * on the fast travel map in adventure mode are creatures and armies moving around on the world map.

Non-player adventurers will group up in parties and wander around, or adventure alone. They will also go on quests to retrieve artifacts in play, which they receive from historical figures that are in power, for example, a lord or noble from another site. For fortress mode, this manifests as visitors coming to your fort and requesting you hand over artifacts. If you say no to them, they may try to steal it from you, or outright attack your fort.

In adventurer mode, this is more subtle: non-player adventurers can be found who are looking for artifacts, and may compete with you when you are trying to get artifacts, if they happen to be looking for the same artifact. If you are holding the artifact they seek (even if you are hiding it in your backpack), they will try to mug you (like bandits) and may also attack you, follow you around, or vocally demand that you give them the artifact.

Greetings from the mountainhomes. Let's discuss our situation.

In an active fortress session, the player will get information about current events through the liaison. During the meeting, all information will be implied, while relevant updates will be displayed on the Civilization and World Info screen.